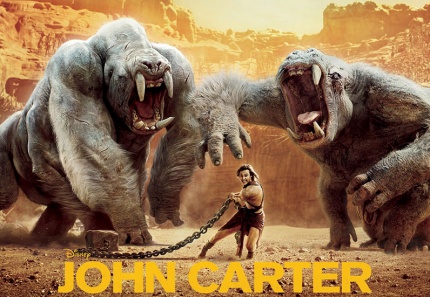 John Carter is the highly anticipated sci-fi live-action 3D feature from Walt Disney Pictures scheduled to release in March 2012. Directed by Andrew Stanton (Wall-E, Finding Nemo), the film is a sweeping action-adventure set on the mysterious and exotic planet of Barsoom (Mars). John Carter is based on a classic novel by Edgar Rice Burroughs, whose highly imaginative adventures served as inspiration for many filmmakers, both past and present. The film tells the story of war-weary, former military captain John Carter (Taylor Kitsch), who is inexplicably transported to Mars where he becomes reluctantly embroiled in a conflict of epic proportions amongst the inhabitants of the planet, including Tars Tarkas (Willem Dafoe) and the captivating Princess Dejah Thoris (Lynn Collins). In a world on the brink of collapse, Carter rediscovers his humanity when he realizes that the survival of Barsoom and its people rests in his hands.
The movie is being edited by Eric Zumbrunnen. First assistant editor Erik Jessen, along with assistant editors Jeff Stone, Toby Lloyd, Ben McCambridge and Lindsey Morrow, working in Berkeley, California, along with visual effects editor Laura Jennings working in London, use AJA's KONA 3 capture and playback card to streamline editorial workflows and reviews.

Editing teams in both places leverage AJA's KONA 3 to capture media from HDCam SR for editing in Apple ProRes on Final Cut Pro, and for playback and review on client monitors. Jessen and his team also set up a system at Walt Disney Pictures in Burbank with a KONA 3 card to facilitate studio-side reviews. They have a Mac Pro system with KONA 3, and we just come down with the media and transfer it to the Mac Pro, which drives a Christie 2K projector. It looks great and couldn't be any easier," said Jessen.

AJA's Hi5 Mini-Converters are also part of the editorial workflow on the movie, used to convert HD-SDI to HDMI for client monitors in Zumbrunnen's main editing suite.

Jessen has deployed AJA KONA cards in previous digital workflows on Sky Captain and the World of Tomorrow and Where the Wild Things Are. He and his team are also investigating using AJA's Ki Pro tapeless recorder for executive screenings on their next feature. "Playing off of a laptop from a computer hard drive can be a little nerve racking," said Jessen. "We'd love to remove that from the screening equation--we know that Ki Pro is being used in this way. It's a promising solution for us."