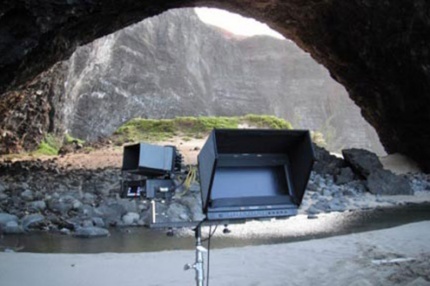 The rise in popularity of digital acquisition using cameras such as RED, ARRI Alexa, and Panavision Genesis changed everything in video assist since operators were able to capture almost exactly the same image as what the lab was using for the movie, opening the door to endless possibilities for use in post production and post filming use on set. Productions are now able to capture video that's nearly identical to what the camera records. This paradigm shift has opened the door to endless possibilities including on set 3D visualization and digital compositing.

"When developing our solutions, we chose to integrate AJA gear because they are the best at what they do and stand behind everything they make," explained Johenning. "No company has been as open with their toolset, and supportive of 3rd parties. The integration between AJA and QTake has enabled a terrific, reliable video assist solution."

Ocean Video designed a custom 3D studio cart dubbed 'Brainstorm' that supports two 3D camera rigs, incorporating a MacPro tower with two AJA KONA 3 cards. Since each KONA 3 supports two SDI inputs, two KONA 3 cards can be used to record images from up to four cameras at once. The images are then synced in pairs so both rigs are recording in stereo.

With this solution, video assist and final shots are almost identical. Images captured with both stereo cameras in full resolution can be played back in 3D for the director. Ocean Video employed this technology on their first 3D project, Pirates of the Caribbean: On Stranger Tides. Producer Jerry Bruckheimer and director Rob Marshall were able to almost instantly view an exact 3D simulation of shots, whether on a ship, in the jungle or in a lagoon, on a 50" 3D television.
Since many of the filming locations were extremely remote, and impossible to bring their studio cart to, Ocean Video also made use of the AJA Ki Pro portable recording device. On the first day of working on Pirates, the film crew was helicoptered into a protected cove in Hawaii. The entire video assist solution was transported in two cases: one with the monitor with battery power and a Ki Pro in a watertight case. Johenning approached the location via jet ski and had to swim ashore with the cases. "Once set up, the Ki Pro could record and monitor shots, which was incredible, especially considering the conditions and location," concluded Johenning.

Johenning summed it best by adding "Whenever I have a challenging video task to solve, I know I can depend on AJA gear to come through with flying colors."