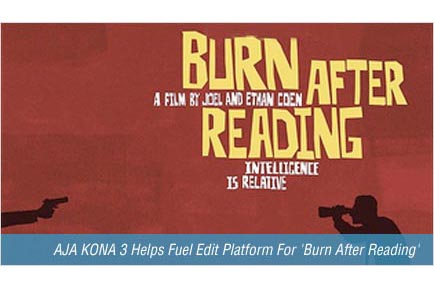 Video Capture and Playback Cards Provide Robust I/O and Conversion for the Latest Feature from the Coen Brothers.


AJA Video Systems, a leading manufacturer of professional video interface and conversion solutions, announced today that its KONA 3 video capture and playback cards were in use during editing of Ethan and Joel Coen’s latest comedy thriller, “Burn After Reading,” to streamline the film’s Final Cut Studio editorial pipeline. “Burn After Reading” premieres today at the Venice Film Festival, and is set for US theatrical release on September 12, 2008.

"After our success with the AJA KONA cards on ‘No Country For Old Men,’ there was no question that we would make them a part of our workflow with Final Cut Studio on ‘Burn After Reading,’ said David Diliberto, Associate Producer for the film. “This combination created such a stable platform for us that we changed very little in our set-up from the last movie. This time around, we cut using Apple's ProRes codec, which has bigger file sizes and higher resolution images than the DVCPRO HD codec we used on ‘No Country for Old Men.’ The KONA cards also made processing QuickTimes out of Final Cut very efficient.”

“Burn After Reading” is a dark spy comedy written and directed by Joel and Ethan Coen. The film unfolds when an ousted CIA official’s memoir accidentally falls into the hands of two unwise gym employees intent on exploiting their find. “Burn After Reading” features an all-star cast that includes John Malkovich, Tilda Swinton, George Clooney, Frances McDormand and Brad Pitt.

“Once again, we are very satisfied customers and the AJA KONA 3 cards will be used on Joel and Ethan's next movie, ‘The Serious Man,’ which starts shooting next month," Diliberto concluded.