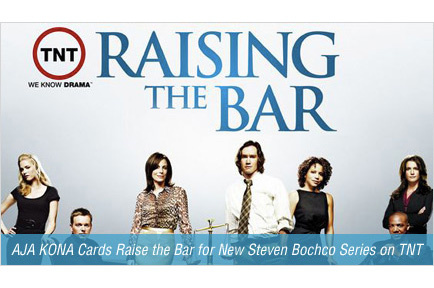 
AJA Video, a leading manufacturer of professional video interface and conversion solutions, announced that AJA KONA cards are in use by the team working on “Raising the Bar”, acclaimed producer Steven Bochco’s latest legal courtroom drama set to debut on TNT on September 1, 2008 at 10/9PMc. When the show was greenlit, Assistant Editor Nick Berrisford was tasked with designing an editorial workflow based around Apple’s Final Cut Pro.

“We chose to standardize on AJA KONA cards for the in-house Final Cut Pro edit system at Bochco Media, LLC, because of my previous experience with the reliability of AJA’s products,” explained Berrisford. “We like the ability to view out directly to 1080p broadcast monitors, and also want to view the material on a standard definition TV to get a sense of what most of our audiences will see. The KONA cards allow us to go out to both displays simultaneously in real time.”

Executives wanted to find a way for the nine-episode series to be produced more efficiently, and part of that included working with Final Cut Pro. This enabled the production to go completely tapeless, derive show dailies in ProRes and avoid a traditional assembly conform, saving the show both time and money. Working this way also extended creative freedoms to the editorial team since they no longer had to lock picture early to prepare EDLs, and could make changes themselves, such as picture fixes and VFX, on the fly at any stage of the post process.

The equipment in use includes an Apple XSAN 2 with two 7-terabyte Promise Technology independent RAIDs, connected to five workstations (three editor and two assistant editor stations—one of which is also used to create graphics and effects for the series). The workstations all include AJA KONA cards for review playback of audio and video to external monitors. Most of the show’s effects are done using Adobe After Effects, and the KONA card is also tapped for external monitoring directly out of After Effects.

“Raising the Bar” is a new legal drama from Emmy®-winning producer Steven Bochco. The series stars Mark-Paul Gosselaar (“NYPD Blue”), Gloria Reuben (“ER”) and Jane Kaczmarek (“Malcolm in the Middle”) and follows the lives of young lawyers who work on opposite sides—the public defender’s office and the district attorney’s office—as well as those who sit in judgment of their cases.

KONA 3 is the ultimate uncompressed capture card for seamless operation with Apple’s Mac Pro systems and Final Cut Studio 2. Supporting any uncompressed SD or HD format, including Dual Link and 2K, KONA 3 captures and plays back uncompressed 10-bit and 8-bit digital video and 24-bit digital audio, providing unparalleled power and workflow efficiency. KONA 3 also includes a variety of 10-bit broadcast-quality features, such as hardware-based up-, down-, and cross-conversion to and from HD, and adds a live hardware HD/SD keyer for compositing bugs, live clips, and other elements over video.