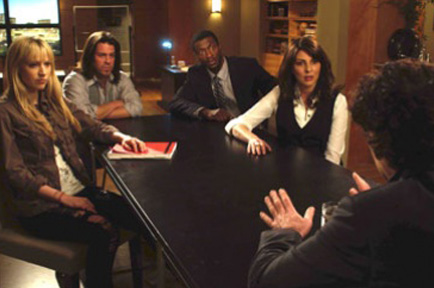 Grass Valley, CA - AJA Video Systems announced that production and post company Electric Entertainment is using its KONA video capture cards and conversion solutions in an all-digital workflow for the prime-time TV drama “Leverage” as it heads into its third season on TNT. The show, produced by Dean Devlin and starring Timothy Hutton, makes its season three debut on Sunday, June 20, 2010 at 9:00PM Eastern and Pacific time.

“Leverage” is created from start to finish at Dean Devlin’s Electric Entertainment in Hollywood, which houses not only editorial and finishing, a mixing stage and screening room (equipped with 3D capabilities and 5.1 audio) but script writers as well. “Leverage” has used AJA KONA cards since its pilot episode.

AJA KONA 3 and KONA LHe video capture cards and a host of converters play a key role in the all-digital workflow; AJA converters are used to view signals pulled off camera directly on set, Kona cards accelerate ingest of ProRes files into Final Cut, handle the 24-to-30 frame conversion, and are integrated into all editing and playback systems to monitor post production and color correction.

Electric Entertainment post production engineer Bill Ritter said, “We’ve been working with AJA gear for years. It’s incredibly reliable equipment and we’re really happy with the level of support we get from the company.”

“Leverage” editor Brian Gonosey said, “We’ve been using an all-digital workflow since the very first episode. Once Dean Devlin got a taste of cutting in HD with KONA-enabled ProRes HQ he wondered why anyone would ever cut in SD again. He adopted this workflow for all of his shows and movies and he’s all about taking risks to get to the next great thing. AJA has always supported us in doing that.”

During the off season from “Leverage,” Electric Entertainment took some time to investigate a 3D playback workflow for features and shorts. They beta-tested the version of AJA’s KONA 3 driver that supports 3D stereoscopic output through Cineform’s Neo3D software on an animated 3D short that Devlin created for Cannes, and established the solution as its 3D playback workflow going forward.