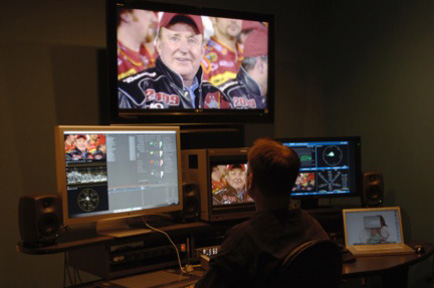 As part of its transition to HD, and in preparation for a move later this year to a new facility at the 40,000 square foot NASCAR Plaza under construction in Charlotte, North Carolina, NMG made the conversion to an all-Apple ProRes workflow. The busy facility, led by Jeff Lowe, NMG managing director, media and broadcast technology, employs 16 KONA 3 cards to ingest 150 hours of multi-camera shooting for each race. An additional 18 KONA 3 cards are used for editing playback in NMG’s 10 edit bays, as well as to handle duplication and new media, and to support field operations for the NASCAR Sprint Cup Series and NASCAR Nationwide Series.

“We’re an all-AJA, all-ProRes shop,” Lowe said. “We’re big AJA fans, and prefer to use their products whenever possible. When we made the decision to switch to HD, we knew we wanted a 10-bit solution, and the obvious choice was the KONA 3. My past experience with AJA convinced me that pairing a KONA and a Mac is as good as any dedicated hardware solution there is in the field."

In addition to the KONA 3 video cards employed on the post production side of operations, NMG also uses the AJA FS1 frame sync in its field operations. The FS1 is a universal HD and SD, audio and video frame synchronizer and converter supporting virtually any input or output format in use in the 40 production trucks NASCAR employs.

“The FS1 is very reliable,” said NMG Field Operations Managing Director Steve Stum. “The challenge of our operation is that it runs 40 weeks a year, at a different location every week, which means that we can’t afford to buy equipment we don’t have complete confidence in. There’s never any question about using AJA.”

NASCAR Media Group is a media, marketing and entertainment company that creates and produces programming related to the sport, manages its media partnerships, and forges relationships to integrate the sport into mainstream entertainment. As the internal production and creative services company of NASCAR, NASCAR Media Group is the exclusive rights holder of NASCAR event footage, race data and content. The NASCAR Media Group leverages The Sight, Sound and Emotion of NASCAR through TV and film production, home video, licensed consumer products and premiums for the sports’ sponsors, tracks, teams and fans. To learn more, visit www.productions.nascar.com