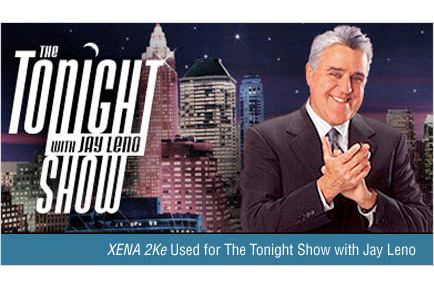 AJA Video Systems, a leading manufacturer of professional video interface and conversion solutions, announced today that The Tonight Show with Jay Leno is using AJA's XENA 2Ke video card as a key component of its VFX editing pipeline. AJA XENA 2Ke is the company's top-of-the-line card for Windows Vista and XP, delivering uncompressed SD, HD and Dual Link HD video, enabling customers to work with 2K frames in a flexible and future-safe architecture. Mac McAlpin has been the VFX Editor for The Tonight Show for 1five years. "I recently started using the AJA XENA 2Ke card both for ingesting HD green screen, and as part of our Adobe After Effects compositing workflow. I love the way the XENA interfaces with Adobe applications, and the fact that the video capture and playback windows are all accessible directly within the After Effects GUI is really killer," explained McAlpin.

McAlpin is part of a team that produces pre-recorded green screen comedic segments for the show, along with credit roll montages and last-minute effects that might be required on-the-fly during taping.

"We had a particular instance last season where the XENA 2Ke card was a life-saver. Something appeared on-camera that we needed to get rid of while taping the show. It was during a guest interview, so it wasn't anything we could re-shoot. I took my HD CAM recording and fed it into XENA, loaded the clip into After Effects and tracked the offending object then blurred it out; and by the next commercial break-some 15 minutes later-the shot was safe for air, ready and complete in HD to hand over to the show's editors," McAlpin continued.

The Tonight Show with Jay Leno was first introduced to the AJA XENA 2Ke card by LA-based system integrator and AJA dealer DV411 who has been servicing the show for over ten years. "When The Tonight Show needed a real time HD key-out solution with bullet-proof reliability that would also work well with After Effects and the HP xw9300 workstation, the AJA XENA 2Ke was an obvious choice. When AJA's engineers quickly provided a tweak to the XENA 2K drivers to address the show's special needs, we knew we were getting unmatched support for our client as well," said Cutter Stevens, Technical Director of DV411.

Mac McAlpin heads the VFX Editing team in the Tonight Show control room with assistance from After Effects artist Gary Reisman and VFX Editor Fred Kaplan, creating pre-recorded 'drop-in' segments that are featured regularly on the show for comedic effect. Adobe After Effects is a core tool for these segments and the AJA XENA 2K provides an ideal complement for video ingest and playback. The show's production pipeline includes Sony HDCam as the main acquisition format and a separate Avid Nitris department for editing, with AJA XENA 2Ke in use primarily for ingest of footage, though the team is also working on a playlist functionality to make XENA more of a main frontline tool in playback for the show.