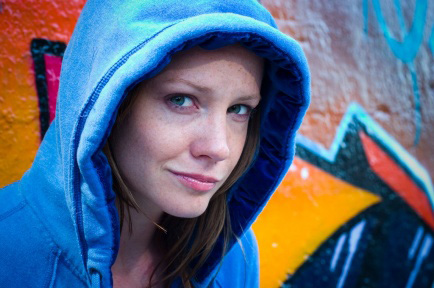 "And Then Came Lola," A fast-paced romp through the streets of San Francisco loosely inspired by the art-house classic "Run, Lola, Run," stars Ashleigh Sumner as Lola, a talented but distracted photographer on the verge of success who could lose it all if she doesn't make it to a crucial meeting on time.

Co-directed and co-produced by Ellen Seidler and Megan Siler of Fast Girl Films, the film premiered in June 2009 at the 33rd Frameline LGBT Film Festival, and has gone on to be screened at film festivals around the country, including the Philadelphia QFest and the Los Angeles Outfest. Under a distribution deal with Wolfe Releasing, "And Then Came Lola" is scheduled to open in theaters in spring 2010.

Nordin, who also served as the project's second unit DP, says he chose to work with AJA tools because of the high level of quality they provide. "AJA offers industry-standard tools at a professional level," Nordin said. "Once I was able to see the difference between AJA solutions and some of the other products out there, it was pretty much a no-brainer."

Shot on a Panasonic AG HVX200 in 720p, "And Then Came Lola" employed an all-digital workflow. Footage was captured to P2 cards, and then ingested into Apple Final Cut Pro for editing. Once the picture was locked, it was split into "reels" and moved into Apple Color for color grading. Following color correction, the material was brought back into Final Cut Pro as ProRes HQ files and reconstructed into a reference sequence. Nordin then employed both the KONA LHi and Io HD to up-convert the files to 1080p for the film master.

"The Io HD saved us time and money," Nordin commented. "It provided a level of quality comparable to what we could achieve with Apple Compressor, and in a fraction of the time. What would normally take a full three and a half days could be accomplished in just an hour and a half."

Nordin also appreciates the 10-bit processing available with the KONA line. "There's quite a lot of difference between 10-bit and 8-bit processing with fine details, shadows and highlights," he said. "The KONA card works in a 10-bit color space, with significantly better color and luminance fidelity that really helped give our online edit quality a boost. I was so impressed with what KONA has to offer that I ended up buying the KONA 3 to use on projects shot on the RED camera."

The KONA family is AJA's line of 10-bit uncompressed capture and playback cards for video and audio input and output on the Mac platform. KONA cards lead the way with features that satisfy even the most advanced video workflows. From the KONA LSe and its complete suite of analog and digital SD support and the KONA LHe, which bridges the SD and HD worlds, to the KONA LHi with support for HDMI and 3G SDI, going all the way to the industry-leading top-of-the-line KONA 3 with high-end features including SD/HD, hardware up/down/cross-conversion, dual-link and 2K support. A simple, affordable desktop Mac Pro system and a KONA card deliver the quality and function of a full-featured nonlinear editing suite at a fraction of the price.

Io HD brings HD editing to the MacBook Pro and Mac Pro utilizing Apple's ProRes 422 technology, while also supporting SD editing workflows. Io HD includes many high-end features such as up-, down- and cross-conversion, all at 10-bit hardware-based quality. Io HD offers unmatched connectivity via its myriad of professional analog and digital interfaces. Io HD is a portable device that works with Apple's Final Cut Pro for professional editing, and also with other QuickTime applications on Mac OS X for graphics, audio and digital content creation.