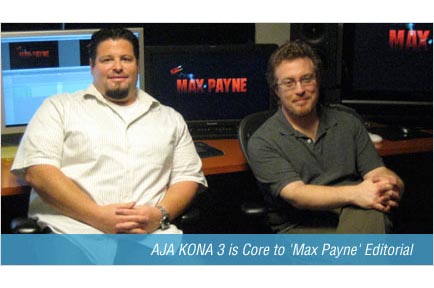 Zimmerman and First Assistant Editor Ian Silverstein got involved in the project just prior to principle photography. The film was shot in Toronto, and Deluxe Toronto completed lab-processing, telecine and captured HD dailies into Final Cut Pro using a KONA 3 card to deliver media via SmartJog to the editorial team based in LA. The editorial department in LA consisted of four Intel-based Mac systems running Final Cut Pro (one editing system, one assistant editing station, one for VFX editing and one rendering station). All of the three editing stations had AJA KONA 3 cards with breakout boxes connected to HD monitors and a 7TB Apple Xsan.

One unique implementation of the AJA KONA 3 card on this project was in outputting DVCPRO HD QuickTime media to integrate into the mix stage pipeline at Warner Bros. in Burbank, CA. “Because of its compatibility and ease of integration with highly sophisticated systems, we tapped the KONA 3 card to enable HD playback of the film on the mixing stage at Warner Bros without the need to do any additional transcoding,” explained Ian Silverstein. “Without having to go out to tape, the quality is virtually lossless, which makes it very easy to mix and sync dialogue—even for background characters that may be out of focus. All we do is hit ‘export,’ give Warner Bros a DVCPRO HD File, they load it—and in the Firewire world it only takes about three or four minutes until they’re able to play our HD QuickTimes through their 2K Christie projector using the KONA 3 card. The process is almost immediate, we don’t have to produce a separate codec for the stage, and it’s easy to add new shots and make updates while on the stage without much downtime at all. That can translate into huge time and cost savings when you’re working at a professional dubbing facility,” added Zimmerman.

The edit team also took advantage of the real time matte capability in KONA 3. “One of the really nice features of the card is that I’m able to use a matte to hide burn-ins for the director so that he’s not distracted by them when reviewing cuts,” said Zimmerman “It’s a great way to put a title overlay into your sequence without having to render it prior to playback,” continued Silverstein.

This is the second consecutive film project with Fox utilizing the Final Cut Pro/AJA KONA 3 pipeline for both Zimmerman and Silverstein, having recently worked on “Alien vs. Predator: Requiem.” “The most important thing about any editing system is its core, and AJA’s KONA 3 is the core of ours,” Zimmerman concluded.