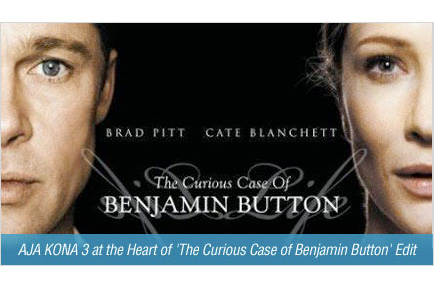 Directed by David Fincher and starring Brad Pitt and Cate Blanchett, the film's screenplay was adapted by Eric Roth from a 1920s F. Scott Fitzgerald story and tells the tale of a man born in his eighties with the unusual condition of aging backwards. "The Curious Case of Benjamin Button" received a total of 13 Academy Award nominations, including nominations for Film Editing and Best Picture and won the Oscar for Art Direction, Makeup and Visual Effects.

AJA OEM partner S.two Corporation, a leading provider of uncompressed data recording products for digital movie production, developed its proprietary i.DOCK recording device for the film, tailoring the hardware to fit the production team's needs. Footage for "The Curious Case of Benjamin Button" was captured on-set using S.two's D.MAG hard drive storage magazines and transferred to the i.DOCK for logging and conversion to XML files before being imported into Final Cut Pro via AJA's KONA 3 card.

"We've been using KONA on all our productions since it first became available," said Steve Roach, VP Marketing, S.two Corporation. "The cards are stable, reliable and come with AJA's unprecedented customer support."

"With the KONA 3 card's ability to transcode in real time, i.DOCK is able to play back footage as HD 4:4:2 video with the look-up table (LUT) already supplied," Roach continued. "Instead of taking a day or two to produce, dailies literally become 'hourlies.'"

In addition to providing digital dailies in real time, AJA's KONA 3 was also employed by the production team as an integral part of the film's Final Cut Pro-based editing workflow. The editorial team, which includes Oscar-nominated co-editors Angus Wall and Kirk Baxter, worked out of edit suites in Los Angeles, each one equipped with a video monitor and KONA 3 card used to play back material in Final Cut Pro.

"We've used AJA KONA cards in every one of our systems for several years now," said Wall. "KONA is very flexible for both SD and HD workflows for editorial and color grading work alike. It has latent capabilities only now being explored, such as using display LUTs for virtual color management. Uses like this will dramatically evolve how we work and continue to give tools to the desktop user that were once the domain of expensive single-purpose "big iron" machines."

"The Curious Case of Benjamin Button" is the second consecutive film project with Fincher utilizing the Final Cut Pro/AJA KONA 3 workflow for Wall, who also worked on Fincher's 2007 feature, "Zodiac."

"Everything for 'Benjamin Button,' from principal photography through post production, was played through the KONA cards," Roach explained. "KONA is the heart of the operation, but it's invisible, which is exactly how it's supposed to be. The ability to have the KONA cards inside the Macs is what made the speed and turnaround absolutely possible for this production. It's a critical part of being able to get the material from the set to the whole rest of the system."

"Using KONA means there's one less thing to worry about," concluded Roach. "For 'Benjamin Button' we were digitizing anywhere from 10K-30K feet of footage a day, throughout the day. And the KONA cards were able to keep up with all of it in real time."