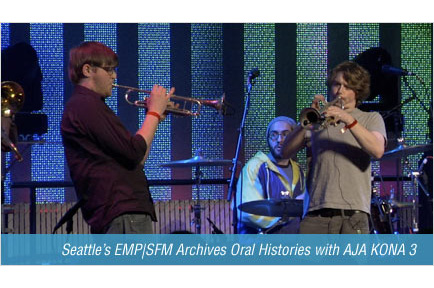 David Wulzen is an editor and assistant producer of film and video for the curatorial department of Seattle's Experience Music Project|Science Fiction Museum and Hall of Fame (EMP|SFM). Seattle's EMP|SFM is a museum of music that first opened in 2000, and in 2004 the Science Fiction Museum was opened within the same building. Wulzen is responsible for producing, filming, collecting and editing oral histories from musicians, artists and filmmakers that are maintained as part of the institution's library and archive.

Wulzen oversees the archive of over 800 filmed interviews, and continues to produce and film additional ones regularly as new exhibits are curated. He started using AJA's KONA 3 cards as part of his production workflow when the museum began making the transition of all their content to HD. KONA 3 is AJA's top-of-the-line uncompressed capture card for SD, HD, Dual Link 4:4:4 HD and 2K formats for Apple Mac Pro systems.

Wulzen's video projects very depending on the given exhibit, ranging from documentary style narratives to interpretive audio/visual pieces. Between the two museums however, the institution has amassed an enormous archive of interviews across a range of different mediums. The museum's earliest interviews were shot on 16 millimeter and later transferred to Beta, and up until about a year ago, most were shot on BetaSP and DigiBeta. Today, new interviews are acquired on a Panasonic P2, though sometimes also on Sony HDV and HDCAM cameras.

"We have this huge archive of SD material and we needed a way to incorporate it into our newly acquired HD material," said Wulzen. "The KONA 3 was really the only solution that I considered as an editor and producer. It solved a lot of our issues—the ability to up-convert our SD clips to match our HD footage being the primary one. However, having the ability to down-convert in real time has also come in handy when preparing traveling exhibits where venues might not necessarily support HD. The flexibility of KONA 3 is great."

In addition to acquiring new material for exhibits, Wulzen also adds to the archive by recording live interviews with musicians, producers, writers and artists for EMP|SFM's popular Oral History Live! program. He also produced and edited three and four-camera shoots of EMP|SFM's Sound Off!, an annual underage battle of the bands for Northwest musicians ages 21 and under, and will be concluding the program with a documentary featuring each of the semi-final winners, as well as taking a look at the impact the program has on the underage Northwest music scene.

Some current projects that are being worked on by Wulzen and his team include an update to EMP|SFM's "Northwest Passage." What had originally been a rough timeline of the Northwest music scene from the 1950s to the present day, will now focus more on the impact Nirvana had on the mid 80s to early 90s Northwest music scene and the creation of Grunge. "This is exactly why we needed something like the KONA 3," added Wulzen. "We already have an incredible collection of filmed interviews of Northwest musicians and artists, but most of them took place 10 years ago. Having a way of utilizing that footage, as well as new high definition interviews for the exhibit, is the perfect representation of how crucial the KONA 3 really is."

"One thing I love about the KONA 3 is the flexibility it allows to adjust the frame size and aspect ratio any way I want it to work. That flexibility and control is key, especially here where we're constantly combining current and archival footage," concluded Wulzen.