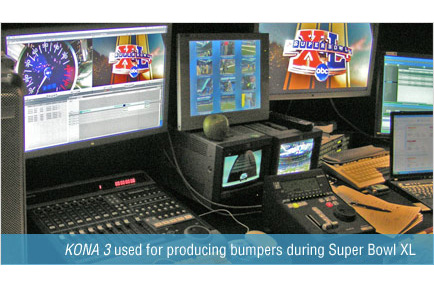 AJA KONA 3 gave him all of the video capture and playback capabilities he was used to with the accelerated performance of the new quad processor G5 Mac. Working on KONA 3 gave the ABC broadcast pristine HD quality output from the G5 system and dramatically sped up the near real time production demands of producing bumpers during the Super Bowl broadcast.

Bumpers, featuring highlight shots from the previous 10-15 minutes of game play are cut on the fly and produced with a less than 15-minute turnaround time. In a typical game, Leimbach is generally able to produce 5-6 bumpers, however with the accelerated performance of the KONA 3, he was able to complete 9 finished bumpers to air during the Super Bowl.

"With KONA 3 we had the speed and ability to work much faster than ever before. When you're cutting live bumpers everything is happening very quickly and the reliability of your gear is paramount. The KONA 3 worked flawlessly and provided seamless workflow transitions as our tape moved from Final Cut Pro, into Motion and Sound Track Pro then back into Final Cut Pro and back to air. Needless to say, the production team was ecstatic with the performance, output quality and volume," said Leimbach.

Leimbach used KONA 3 in combination with the Apple Final Cut Studio Suite to edit the material in Final Cut Pro, overlay graphics in Motion, add audio in Sound Track Pro and finish the spots out in Final Cut.

"KONA lets us switch output natively between all of the different programs in our workflow and really streamlines our entire process," Leimbach concluded.