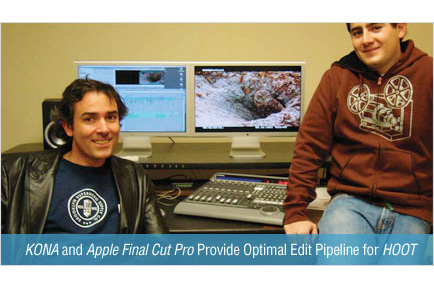 AJA's KONA uncompressed video capture card has been used with Apple Final Cut Pro as the editing platform-of-choice for the new movie HOOT. AJA and Apple technology allowed fi lm material to be brought over at high resolution, viewed, cut and output for the studio at pristine quality and with signifi cant time- and cost savings.

"We were screening dailies right out of the Final Cut Pro system with a KONA card on 23-inch Apple Cinema displays. This setup allowed us to cut at 1080i resolution, lay down previews to a D5 deck and go out to an HD deck for studio reviews. The quality was amazing and the results with the KONA card– even projected in 2K on a huge screen – were indistinguishable from fi lm," said HOOT editor Alan Bell.

KONA 2, the predecessor to the recently released KONA 3 (shown above), supports full-bandwith, 10-bit 4:4:4 RGB video capture for 1080i, 1080p and 720p formats. Assistant Editor Ryan Chavez leveraged the card's 1080 DVC Pro codec with the K-Box and DVI-HDP converter to receive HD dailies, digitize them into Final Cut Pro and have them immediately ready for editing.

Chavez cites a number of reasons for choosing an AJA KONA solution with Apple Final Cut Pro. These include the performance and reliability of the setup, as well as the price/performance and fl exibility gained by making creative changes and outputting without a traditional online.

According to Chavez, AJA's KONA card with the K-Box and SDI-DVI-D converter worked perfectly for what was needed on HOOT. "A lot of people told us we wouldn't be able to do this fi lm in 1080i—and it would have been impossible without the KONA solution," Chavez said. "The AJA KONA card with Apple Final Cut Pro provided the best option for this fi lm project," he continued. "Not only did we fi nd the KONA card to be totally reliable, it gives fi lmmakers the fl exibility to cut and make changes up to the last minute, to create a 5.1 audio mix and output straight from the system. It's a huge time- and money saver in the long run."

HOOT, written and directed by Wil Shriner and based on a novel by Carl Hiaasen, releases April 21st from New Line Cinema and Walden Media. The fi lm tells the uplifting tale of a young man intent on saving a group of endangered owls and stars Logan Lerman, Brie Larson and Cody Linley. Frank Marshall and Jimmy Buffet are producing the fi lm, with Buffet also contributing original music.