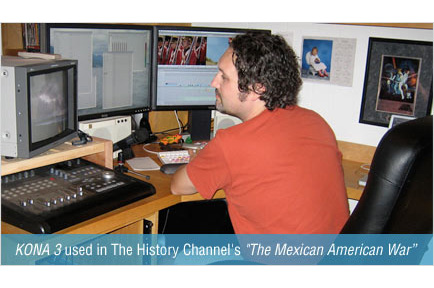 The KONA 3 video capture card was used by Jim Lindsay Productions, Inc. for use on "The Mexican American War," a two-hour television special for The History Channel. The KONA 3 is AJA's top-of-the-line uncompressed capture card for SD, HD, and Dual Link 4:4:4 HD for PCI Express (PCIe) Apple G5 Power Macs and Mac Pro systems, and was an integral part of the film's Apple Final Cut Pro editing pipeline. The documentary is directed by Jim Lindsay and hosted by boxing legend Oscar De La Hoya. It premiered Friday, September 29th.

"I come from a traditional editorial background where you always offline then online and if you need to output in 1080P, you have to capture in 1080P. Using the AJA KONA 3 card was a total breakthrough; the 1080P cross convert was totally seamless and our files were output beautifully in real time without any wait for renders," explained Shane Ross, editor of "The Mexican American War".

The production featured both a top-notch staff and a cutting-edge workflow, in which KONA 3's new cross convert capabilities proved to be both a time and money saver for this television special that reexamines the controversial war (1846-1848) that resulted in the United States taking control of what was nearly half of Mexico's territory.

Said Jim Lindsay, the film's producer and director, "Right now everyone is trying to determine what kind of HD deliverable they want so the trick is to set up a workflow that is efficient but also flexible enough to accommodate every HD format. When we started on this project The History Channel's standard delivery format was 720P; however by the time we were knee deep in production, their preferred deliverable standard was changed to1080P. Having access to local AJA support via Jon Thorn and the resourceful folks at the DR Group, who completed the cross convert from 720P to 1080P, were total lifesavers on this project. The AJA KONA 3 card performed beautifully!"

The workflow on "The Mexican American War" consisted of footage acquired on Panasonic VariCam and Panasonic HVX-200 to the G-Tech GRaid at 720P 23.98, straight into an online edit in Final Cut Pro from FW 800 drives, then output via AJA KONA 3 to the deliverable 1080P 23.98 format.

"We are consistently improving upon our successful KONA 3 cards to meet the demands of our customers and the dizzying pace of new formats and standards in HD," said Jon Thorn, Product Manager Mac Products, AJA Video Systems. "We are really pleased that KONA 3 was tapped to provide a simple and efficient solution to delivering this production to The History Channel in 1080P."

KONA 3 is the ultimate uncompressed capture card for seamless operation with PCI Express (PCIe) Apple G5 Power Mac or Mac Pro systems and Apple Final Cut Pro. Supporting any uncompressed SD or HD format, including Dual Link and 2K, KONA 3 captures and plays back uncompressed 10-bit and 8-bit digital video and 24-bit digital audio, providing unparalleled power and workflow efficiency. KONA 3 also includes a variety of 10-bit broadcast-quality features, such as hardware-based up-, down-, and cross-conversion to and from HD, and adds a live hardware HD/SD keyer for compositing bugs, live clips, and other elements over video.