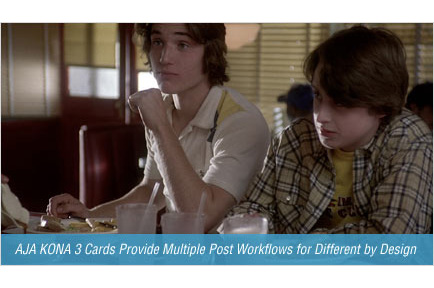 Founded in 2004 by partners Greg Lanesey and Matt Radecki, Different by Design (DXD), along with strategic partner HD Cinema, provides production and post production services to independent filmmakers throughout the US. Lanesey and Radecki have long relied on AJA products, and the facility served as a beta tester for the KONA video capture and playback card when it was first introduced late in 2002.

"We did one of the first online edits with the KONA card about six years ago when it was still largely in beta, and received an extremely high level of support that continues to this day," Radecki says. "AJA doesn't just sell you a product-they're responsible for it. Customer service is almost immediate and always helpful. When people ask us, 'Why KONA? Why not use a lower-cost product?' we know it's because of that reliability and customer support."

DXD and HD Cinema currently own two of AJA's KONA 3 cards, which are put to use on a daily basis at the busy post house on a variety of short, feature and documentary film projects, as well as music videos. "We use the KONA cards for just about every application they were designed for, as well as a couple of other things that maybe no one's thought of yet," laughs Radecki.

"We use the KONA 3 on a lot of studio projects," Radecki explains. "For example, our clients will bring us a clean HDCAM SR, HD CAM or D5 master for us to convert to HDCAM SR with a protection burn for the mix facility. We use the KONA card to run the master tape to tape and add the production burn."

"We also use the KONA 3 for up-conversions," continues Radecki. "We have a number of low-budget clients who've shot 24p anamorphic DV but want an HD master. And we do KONA to KONA conversions where they bring us QuickTime files, which we play out of one KONA card and capture with the other so it's a tapeless up-convert. It's very economical for our customers because there are no decks running."

DXD's KONA to KONA workflow was developed in response to the demand for a low-cost, high quality, SD up-convert solution. "Anyone with two KONA cards has a very powerful up-converting tool that is also completely tapeless, which is really efficient," Radecki says. "Despite the inroads HD has made to becoming the industry standard, a lot of people still have standard-definition product that they need to get up to high-def. Many of these projects don't have the budget to pay for a Teranex, or to run on our decks. But it doesn't take a lot of expensive hardware to hook up two Macs and two KONA cards together, so we can give them an attractive price for a very high quality up-convert."

DXD is confident that its KONA to KONA workflow can deliver the high-quality results its customers demand on a very quick turnaround. "We recently did a test screening for a studio film and there was a little bit of 24p DV stock footage that had to be cut in," Radecki relates. "I hooked the two KONA cards together, grabbed the shots and KONA up-converted them. It looked great-and this was for a full-on NRG test screening-and saved us a trip to the Teranex house. It was 10:00 at night and the screening was the next day. So we just did it, and the results were spectacular."

"We also use the KONA cards for a lot of P2 to HD Cam conversions. People shoot 720 23.98 Panasonic P2 and they have to get that to tape. The KONA card handles the 1920 x 1080 up-res and it goes to tape very cleanly. We've also been using our KONA cards to put EX1 and HDV footage to tape. Finally, we have two RED One cameras, so we're working on RED post solutions and the KONA card is a big piece of the puzzle."

DXD and HD Cinema also use the KONA 3 for more traditional capture and playback to tape. "We do online editing for shorts, docs and features where we capture footage in its native format, work with it, and put it back to tape: either HDCAM SR, HDCAM or Digital Betacam."

Radecki describes typical projects at DXD as potentially problematic because of the number of formats involved. "People want an elegant post solution and the KONA card gives us a lot of flexibility for working that out. The project I'm about to start is a documentary shot on just about every format known to man. We'll use the KONA card to shoehorn everything into a similar codec and raster so they can easily cut it at an online quality. After they lock picture they'll come back to us for color correction and then we'll use the KONA card to put it to tape."

"We take on a lot of low-budget passion projects," Radecki concludes. "Films shot with a lot of different formats, limited budgets and really interesting subject material."