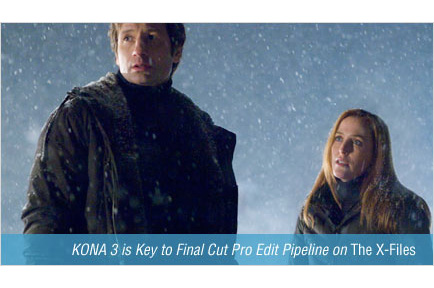 AJA KONA is Key to Final Cut Pro Edit Pipeline on The X-Files: I Want to Believe.

KONA 3 cards were integral to the Final Cut Pro pipeline on Twentieth Century Fox's The X-Files: I Want to Believe. The film, based on the hit television series and starring David Duchovny (Fox Mulder) and Gillian Anderson (Dana Scully), was directed by series creator Chris Carter and released nationwide on July 25, 2008.

"When you're working on a show like this one with a very short post production schedule, you don't have time for mistakes. So when you have a product like the KONA 3 that is high quality, consistent and does it right the first time, it makes the editorial process that much easier," explained Ryan Chavez, First Assistant Editor, The X-Files: I Want to Believe. "I've laid out countless long play tapes of our show and never had a digital hit."

Academy Award®-winning editor Richard Harris (Titanic) cut the film, and worked closely with First Assistant Editor Ryan Chavez, who also handled data wrangling, media management, editorial technical support and pipeline setup for the title. Four AJA KONA 3 cards were in daily use throughout the film's edit to monitor video and audio via a 50-inch plasma monitor on Harris's system and two 23 inch LCD monitors on the assistants systems. The X-Files: I Want to Believe was shot primarily on 35 mm 3-perf and 35mm 4-perf film with additional footage captured using the Genesis and Panasonic P2 cameras.

The editing team worked in a suite that was set up at the Malibu home of the director, with a majority of the edit overseen by Carter himself and/or writer Frank Spotnick. AJA KONA 3 cards came into play every day during the edit for monitoring the latest film cuts. KONA 3 was also used for 2K playback from DPX files for the end credit sequence, allowing the team to preview their clips before locking them into overnight renders.

"I choose to work with AJA's KONA card because I know it works and I know that aside from great picture quality, I'll get a high quality 5.1 mix with stereo left/right and eight channels of audio to a D5 deck, and I'm not fumbling around to make any of that happen. I have enough confidence in and experience with the card to know that I only have to do it once, and I'm not going to get an audio hit or have any sync issues" Chavez concluded.

KONA 3 is the ultimate uncompressed capture card for seamless operation with Apple's Mac Pro systems and Final Cut Studio 2. Supporting any uncompressed SD or HD format, including Dual Link and 2K, KONA 3 captures and plays back uncompressed 10-bit and 8-bit digital video and 24-bit digital audio, providing unparalleled power and workflow efficiency. KONA 3 also includes a variety of 10-bit broadcast-quality features, such as hardware-based up-, down-, and cross-conversion to and from HD, and adds a live hardware HD/SD keyer for compositing bugs, live clips, and other elements over video.