When New York-based filmmakers Jon Reiner and Brad Rothschild teamed up to produce “Tree Man”, an independent documentary focusing on an Upper West Side Christmas tree vendor, they knew the project would be a challenge. Many of their desired shoot locations had limited access, and there was a very small, fixed window of time to capture all the necessary scenes: the few weeks leading up to Christmas. Additionally, the film’s modest budget topped out at around $100,000; 20% of which was raised though a Kickstarter campaign. 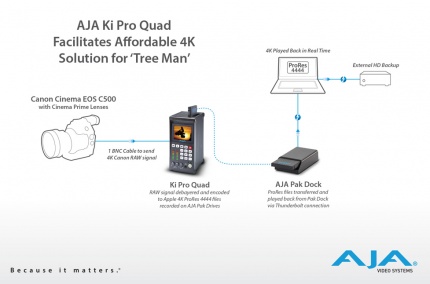 Before shooting, Director/Writer/Executive Producers Reiner and Rothschild consulted with Director of Photography David Leitner, who devised an inventive approach to capture the grandeur of New York during the holiday season. Working quickly with the smallest rig possible, the crew used a Canon C300 to create intimate portraits of tree vendors who flock to the city’s streets every December. But a combination of logistical, practical and aesthetic demands drove the team to instead use a Canon C500 in 4K mode to shoot the nighttime spectacle that is New York City at Christmas, including the iconic tree at Rockefeller Center.

“It may seem counter-intuitive to use 4K to save money and shoot more efficiently, but we wouldn’t have been able to capture what we did any other way,” said Leitner.

“We wanted to create flowing montages of New York's famous Christmas decorations at night as a counterpoint to the challenging personal stories we were telling. But to do so with a large-sensor camera like the Canon C300, we would have needed heavy zooms with servo motors, controllers, extra batteries, a beefier tripod -- not to mention extra cases and cabling to schlep around. Which would have meant an extra assistant or two."

"Instead, with a Canon C500 and AJA Ki Pro Quad, we used Canon EF Cinema Primes to shoot locked-off 4K "masters." Tree Man will be finished in HD, and a 4K original provides more than enough resolution to punch in and simulate dynamic moves like pans, tilts, and zooms during editing and post-production, when the ideal direction and speed of a moving shot in a montage can be better determined. Otherwise I would have had to operate each shot flawlessly, with perfect instincts while under intense pressure, since time -- and permission -- were in short supply on the chaotic holiday sidewalks at Rockefeller Center and Radio City Music Hall."

"Using lightweight prime lenses instead of long heavy zooms helped to not draw attention to ourselves. Even with the AJA Ki Pro Quad mounted on rods at the back of the Canon C500, we had a small unobtrusive rig. Along with another big advantage: maximum apertures of T1.3 and T1.5. The Canon Cinema Primes were two stops faster than zooms for night shooting," continued Leitner.

“Tree Man” follows the annual pilgrimage of Francois, a veteran tree seller from Montréal whose Christmastime stand at Broadway and 102nd Street has been a festive neighborhood fixture for many years, along with other colorful Manhattan tree sellers, male and female. Principal photography on this modern holiday tale began in November 2013.

“Much of the narrative of the film is made up of character studies of people who sell trees on the streets of New York and most of the story reflects that emotional intimacy. At the other end of the story, we’re highlighting what New York City does to celebrate the holidays, and that happens on such a large scale,” explained Reiner. “By shooting those scenes in 4K, we captured the full range of that aesthetic grandeur and dynamic color.”

Recording directly off camera to AJA’s Ki Pro Quad in ProRes 4444 enabled Leitner to review shots in 4K on a MacBook Pro with a Thunderbolt drive, and then, using Final Cut Pro X, output HD ProRes 4444 files to hand off to editors John Cook and Jenny Cook.

“The Ki Pro Quad allowed us to introduce the advantages of 4K to an HD project for an end result that not only looks amazing but was economical to attain,” explained Leitner.

“I’ve used a lot of AJA products over the years, and they are reliable and ruggedly built; the Ki Pro Quad is a real performer and reasonably priced. It enabled us to work in 4K ProRes 4444, an extremely high-quality 12-bit codec with no chroma subsampling. We used a single short BNC cable to send a 4K Canon RAW signal from the C500 to the Ki Pro Quad, and the Canon Log gamma and flattened look you get from the RAW image is all preserved in 4K ProRes 4444."

Still taking shape in the editing room, “Tree Man” is tentatively scheduled for release at the end of 2014. For updates on the film’s progress, visit: https://www.facebook.com/treemandoc