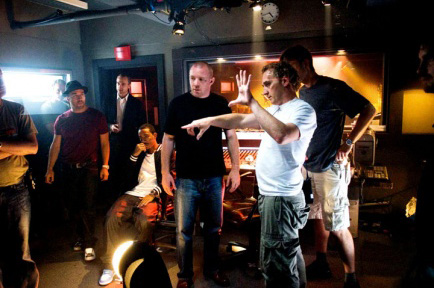 AJA in the Life of a Cinematographer: A Chat with David Higgs, BSC

David Higgs is a BAFTA award-winning cinematographer who has created stunning images for nearly 40 films, television shows and series in a career spanning more than two decades. He was recognized in March of 2010 with a BAFTA Television Craft award for Best Photography & Lighting for "Red Riding 1983," with a BAFTA nomination for "Cambridge Spies," and with two Royal Television Society award nominations for "The Russian Bride" and "Nature Boy." His credits include Guy Ritchie's "RocknRolla," short film "The Stronger," feature crime drama "Tony" and other features; and TV shows and series including "The Tomorrow People," "Cambridge Spies," "Lost in Austen" and more.

With a broad perspective on filmmaking and deep experience of continual change in his craft, how does a creative professional like Higgs experience nitty-gritty technology like video interface and conversion solutions?

"I like technology when it empowers the creative side of things," Higgs said, on a break while reviewing rushes from his current film "Rafta Rafta" at ENVY post in London, "and AJA does that." He's been an AJA user for several years, integrating the KONA video card and Ki Pro digital recorder into his standard equipment set and deploying them on multiple projects.

"I've always owned my equipment and I was one of the first people in the UK to buy a KONA 3. It was a bit of a revelation compared to what I had been using before to look at material and edit my own show reels. You can do so much with it, but it's simple and worked straight out of the box," he said.

Right after purchasing KONA 3, Higgs dove into Guy Ritchie's "RocknRolla," shooting on the Arri D20. "I took all of my Mac gear, partly because I wanted to put some SR footage back into the KONA and have a look at it. I did a quick experiment, taking 4:4:4 out of the D20 and plugging it straight into the KONA. It recorded without a hitch and I thought, ‘that is really impressive.' Not one dropped frame, not one issue."

KONA and the RED Workflow


As an experienced RED camera user (he owns two of them) Higgs also finds AJA KONA a key piece of the RED workflow. "When I first got the RED there was really no way to see the images. That's when KONA really came to be a force for me. I was able to render out 2K DPX files for the director and run them in real time, and when the software went down a bit we could play the R3D files. The core of my success with RED has been the KONA and what it does in terms of the RED footage -- it's been a touchstone, because you know what it's doing, what you're getting." Higgs also used a RED/KONA workflow on "Red Riding 1983," a three-part television mini-series that earned him a BAFTA TV award for cinematography.

"The bedrock of AJA has been fantastic for me," he said. "With the Mac and AJA and the RED I can literally four-wall a job. We're filming, we generate our own rushes, there's a guy who takes the drives and backs them up, and then you can look at it at the end of the day in real resolution and real time, and that's fantastic."


Higgs notes that he's a big believer in recording on the camera, and he purchased the AJA Ki Pro digital recorder -- not for a particular show, but "by instinct, because it just did everything I wanted to do." On the recent 14-week shoot for "Rafta Rafta" Higgs brought Ki Pro into his capture workflow. "We shot on Super 16 and I used Ki Pro to record the video assist on set. We had a Titan transmitting video assist pictures back to the Ki Pro, which gave us a huge library of all of the video assist rushes. This was important because we were shooting in Israel and the rushes were taking 3-4 days to get to us. For continuity it was great to have high-quality QuickTimes so everyone had a good touchstone. We also used it to back up everything we shot there onto hard drives."

He added, "We were working in a hot, difficult environment and Ki Pro never dropped, it never had an issue, never crashed. It's 12-volt and has all of the ‘idiot' things worked out. It just works really well."

Looking Ahead: 4K and 3D


While the majority of work Higgs has done recently has been 2K to 35mm prints, he anticipates 4K will be a new standard. "That's definitely the way the market is driving forward. If you can master to 4K and you are going to print you'll get the best quality possible." He also sees 3D shoots becoming more prevalent, and with it, a myriad of formats and scales. "Having the ability to upscale, cross-scale and work to one master standard is going to be really important, and if a company like AJA can help unify these different inputs and keep them to the same resolution or upscale in a way that works -- that's going to be invaluable."

Taking the conversation full circle, Higgs considers the role of AJA's technology in his creative process. "What AJA provides is a kind of creative center that empowers you as a creative individual, because you've got the tools to play with at hand. It's very empowering."


Since 1993, AJA Video has been a leading manufacturer of high-quality and cost-effective digital video interface, conversion and Desktop solutions supporting the professional broadcast and post- production markets. With headquarters in Grass Valley, California, AJA maintains an extensive sales channel of dealers and systems integrators around the world. For further information, please see our website www.aja.com.