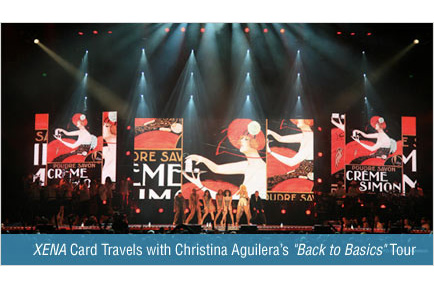 AJA Video, a leading manufacturer of professional video interface and conversion solutions, today announced that its XENA 2K and LS video playback and capture cards are being used as part of the on-site backstage editing system for Christina Aguilera's worldwide "Back to Basics" tour. The XENA 2K, LH, and LS line of products are AJA's top-of-the-line video capture and playback cards for Windows XP, and are an integral part of the pre-visualization and video playback for the spectacle-laden tour.

In addition to an elaborate set, Aguilera’s performance on the “Back to Basics” tour is accompanied by dramatic video footage displayed on giant, wraparound screens. Behind the scenes, veteran video engineer Jason Harvey, founder of Short and Spikey, helps bring Aguilera’s show to life, simultaneously combining elements of pre-created videos with the live event. Harvey works with two systems, an HP 8400 running the XENA 2K, and an HP 8200 with a XENA LS card.

“The XENA 2K gives me the flexibility I need to work on-the-fly regardless of format,” explains Harvey. “Some of the material for the show is actually shot on film, and we’re able to bring those files directly from telecine onto a hard drive—Mac or PC format—and basically just ingest them straight off of the hard drive and into the edit suite. From there, everything goes right up onto the screen, in real time, so we can take a look at what’s working, or what isn’t.”

Harvey’s job is two-fold: in addition to preparing all of the pre-edited video content, he also streams and controls the live video captured during each night’s show. To make all of this possible, Harvey created pre-loaded templates that provide a way for multiple video sources to play in multiple boxes appearing on a single screen. With material from several different editing houses in hand, Harvey uses AJA’s XENA 2K card to load it onto his system and position the clips within the template boxes. Then Harvey manipulates the clips using Adobe Premiere Pro and Adobe After Effects, color correcting them for consistency and creating composites of the video streams for each of the screens before rendering them out for play during the show.

Harvey also provides on-site editing for any extra material needed once the tour is underway, including show clips and other extras for posting on the web. “Normally, something like this would have to be created back in LA, New York or London, which takes extra time,” explains Harvey. “But now I can handle everything on-site, which means we can get new elements up and running right away.”

“AJA’s XENA card has been a huge time-saver,” Harvey continues. “Rather than having to double up on transferring everything back to tape, ingesting the tape, putting it back on the computer and then, finally bringing everything back to the venue, it allows us to have material scanned directly onto hard drives that can be transported straight to the venue. Otherwise, all you’re doing is bouncing something from one format to another format and then back to the format you started with. And when you’re on a tight concert tour schedule, you just don’t have time for that.”

The XENA line of video capture and playback cards are designed to fit a variety of creative workflows based on the Windows XP platform. XENA LH (PCI/PCI-X compatible) and LHe (PCIe compatible) support combined HD/SD workflows; XENA LS supports SD capture and playback; and, XENA 2K delivers uncompressed SD, HD and Dual Link HD while enabling users to work with 2K frames in a flexible and future-safe architecture. The entire XENA line of products ships with AJA’s own stand-alone deck-control, playback and capture application, Machina™, and a host of powerful plug-ins for seamless integration with leading graphics and effects applications. Starting this year, XENA 2K, LH, and LS will support the upcoming versions of Adobe® Premiere® Pro CS3, After Effects® CS3 and Photoshop® CS3, all of which are part of the Adobe Creative Suite® 3 Production Premium release.

Jason Harvey is the founder of Short and Spikey, a full-service creative video company based in the UK specializing in live music events. For more information, visit www.shortandspikey.com