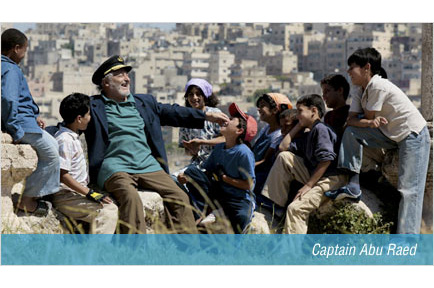 AJA Video, a leading manufacturer of professional video interface and conversion solutions, today announced that its XENA video playback and capture cards were used to facilitate a completely tapeless workflow for Sundance contender Captain Abu Raed. The XENA 2K, LH, and LS line of products are AJA's top-of-the-line video capture and playback cards for Windows XP, and were an integral part of the film's workflow, including on-set acquisition, uncompressed playback and final conform.

Filmed in the Middle East, Captain Abu Raed tells the story of an aging airport janitor (Nadim Sawalha) who is mistaken for an airline pilot by a group of poor neighborhood children and weaves fantastical stories to offer hope for a sad, and sometimes unchangeable, reality. Captain Abu Raed, produced by Gigapix Studios in Chatsworth, CA, is the first feature film to use the Arriflex D-20, and will have its U.S. premiere at the Sundance Film Festival January 23.

Technical supervisor Clark Graff developed a tapeless workflow for the project, recording from two Arriflex D-20s directly to digital film recorders while filming on location in Jordan. Designed and built by Graff, each of the three proprietary GNS_DFRs has 12 terabytes of storage, with eight terabytes useable after quad striping the drives for speed and safety, and are outfitted with AJA's XENA 2Ke video playback and capture cards. Using the XENA cards, Graff was also able to provide instantaneous full resolution uncompressed playback for the director and the DP.

"I chose the XENA cards because of their reliability," said Clark Graff, Technical Supervisor for Captain Abu Raed. "During production, it's crucial that everything work properly. When you're on set, with actors and crew members depending on you, failure is just not an option, especially on a six-week shoot in the Middle East. I've been using AJA products for over eight years, and not one piece of equipment has ever broken. That's what keeps me coming back again and again."

The feature was edited on two Avid Media Composers on MetaSAN enabled 2Gb fiber channel SAN, and then conformed directly on the proprietary GNS_DFR using Premiere Pro CS3. The unusual setup was made possible with AJA's Premiere Pro plug-ins created to allow DPX files to be imported and edited directly in Premiere, which Graff downloaded directly from the AJA web site.

"We couldn't have done the conform from the SD Avid edit without the ingenious plug-ins AJA developed for Premiere Pro," Graff continued. "I was absolutely shocked by how well it worked. We converted the Avid timeline into CMX 3600, opened it up in Premiere and, using the XENA card, turned one of the disc recorders into an editing machine. The remaining disc recorders were used as VTRs running Drastic Technologies Quickclip Pro, and we redigitized the entire thing, uncompressed, using Premiere and AJA. Not only did we ingest with AJA, but we also finished the project with AJA."

The XENA line of video capture and playback cards are designed to fit a variety of creative workflows based on the Windows Vista and Windows XP platforms. XENA LH (PCI/PCI-X compatible) and LHe (PCIe compatible) support combined HD/SD workflows; XENA LS supports SD capture and playback; and, XENA 2K delivers uncompressed SD, HD and Dual Link HD while enabling users to work with 2K frames in a flexible and future-safe architecture. The entire XENA line of products ships with AJA's own stand-alone deck-control, playback and capture application, Machina(tm), and a host of powerful plug-ins for seamless integration with leading graphics and effects applications. XENA 2K, LH, and LS supports Adobe(r) Premiere(r) Pro CS3, After Effects(r) CS3 and Photoshop(r) CS3, all of which are part of the Adobe Creative Suite(r) 3 Production Premium release.