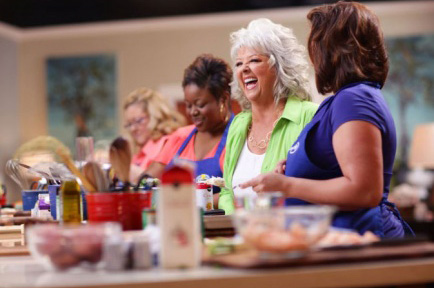 In March 2010 Kraft Foods' Philadelphia Cream Cheese teamed with celebrity chef Paula Deen to launch an online community called "Real Women of Philadelphia." To encourage participation, the site held online auditions for cooks/hosts by having ‘real women' submit videos of themselves preparing their best cream cheese recipes, and having the finalists compete in a live, online cook-off.

The big event took place June 30, 2010 in Savannah Georgia and was streamed live to the "Real Women" website. Local digital production company Meddin Studios handled the live event shoot -- along with six days of studio shooting and editing/production of preview and follow-on video pieces. Their integration partner, Niche Video Products, assisted in the design and workflow based on RED cameras and AJA Ki Pro digital recording devices that enabled Meddin to have identical setups from shoot to shoot, a quick turnaround in post, and the ability to get approvals and dailies out quickly without having to transcode native RED footage.

"We knew from the start that we were going to use RED for the studio shoots," said Niche Video Engineer Jon Foster. "But we had planned to use HPX3000's for the live shoot. When we learned how quick the turnaround was between the first studio shoot and the live event we knew we'd need to have the same rapid turnaround as well as continuity between them. Ki Pro gave us the answer."

Meddin Studios used three RED cameras in the first one-day studio shoot, all ISO'd, and captured footage directly to AJA Ki Pro. For the live shoot, they used three RED cameras and one Panasonic HPX170, all outputting a 720p60 HD-SDI signal, and switched it live using a Panasonic HS400 switcher, recording the camera ISOs and live switch to four AJA Ki Pros. "This workflow gave Meddin a really fast turnaround in post if they needed to go back and edit the live switch or take out pieces to get to the web quickly. Most importantly, it enabled continuity between the shoots," Foster said.

He noted that on the "Real Women" follow up shoot two weeks later, Meddin ran the Ki Pros for five days straight, 10 hours a day with no problems. "They were super happy with it."

Meddin produced and edited pieces from the one-day studio shoot before the live event and the 5-day studio shoot after it, and also created an edited version of the live show. They cut the pieces using two Final Cut Pro systems equipped with AJA KONA 3 cards. "As an integrator we always recommend KONA. They're the best product out there for video I/O; everything is handled in hardware, the support is fantastic, and the warranty AJA offers is longer than anything else out there."

Matt Seigel of EQAL, Executive Producer for "Real Women of Philadelphia," noted, "The production quality and Ki Pro workflow that Meddin put together were above all expectations. We were so impressed with our initial production shoot that we rearranged subsequent shoot dates that were supposed to be in L.A. to Savannah so we could work with Meddin in this efficient, effective way."

The enthusiasm that the "Real Women" community site generated was much higher than expected -- 6,000 women auditioned for the cook/host spots -- and the video content on the site keeps growing. With its RED/Ki Pro workflow in place, Meddin is poised to take on whatever the "Real Women" can dish out.

Founded in 2009 and based in Savannah, Georgia, Meddin Studios is a premier facility for innovation in digital media production, post production and distribution, and an outlet for new advanced digital technology. www.meddinstudios.com

Niche Video Products is an established full service provider of customized high-end video solutions for content creation, infrastructure and distribution for the corporate, broadcast and film industries. Through consultation, they help clients attain their goals for return on investment and effective technology implementation. For more than eighteen years, Niche Video Products has been providing best-in-class solutions for broadcast and post facilities throughout the southeast United States. www.nichevideo.com.