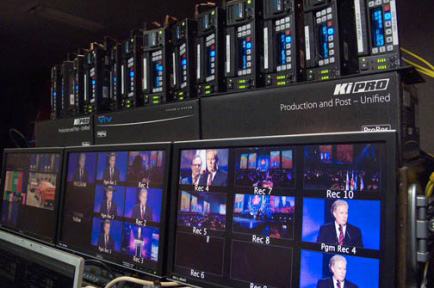 During the National Association of Broadcasters show this year, Mathieu Marano, director at Bureau de Post and Final Cut Pro User Group Administrator in Montreal, overheard longtime friend Dominic Bourget of Inso Media discuss an upcoming project which was to be recorded completely with AJA Ki Pro tapeless recording devices. The Ki Pros were to be tapped for capture, encode and editing of the largest Canadian Olympic Hall of Fame Gala to date -- a 3-hour event in the Montreal Bell Centre featuring live performances from Canadian musical artists. Marano was intrigued, and jumped at the chance to become involved.

"I'd heard great things about Ki Pro and saw this job as an excellent opportunity to test drive the device and really push it to the max -- all while working alongside the amazing team at Inso," said Marano. "We definitely pushed the Ki Pro, and it truly lived up to all of my expectations, especially on a project like this with tight schedules and limited budget restrictions."

Given less than 24 hours, the team was called upon to transform 36 hours of footage from ten different camera feeds into one, two-hour long master including commercial breaks, subtitles and packaging in both English and French for Canadian channels CTV and V Tele.

Director Jean Lamoureux and the production team employed 14 Ki Pros for the project -- 12 for production and two for backup. "With such a rapid turnaround requirement, we didn't even consider tape as an option; recording with Ki Pro just made sense," noted Lamoureux.

A day prior to the event, two mobile video and audio units were deployed, enabling the team to capture sound and images. Video was captured by Dome, which came equipped with its Tribute HD video mobile truck featuring a CCU desk, deck room and control room large enough for a production team of ten. Each were connected to the house sync, timecode and HD-SDI from the patch. The 12 Ki Pro devices, stacked on a shelf three by three, were plugged into a SMC GigE switch and two laptops.

"The set-up was more than ideal with the ability to swap out Ki Pro drives, which allowed the production assistant to transfer the ProRes files quickly at the end of the event," noted Marano. "The Ki Pro's intuitive web interface also contributed to seamless monitoring of six devices per laptop using Firefox."

At the completion of the show the team transferred end credits and alphas from the EVS to the Ki Pros, wrapped up the 12 drives and traveled to the director's house, where they worked on a temporary custom-built SAN. The setup included three Mac Pro workstations running Final Cut Studio. Each workstation included AJA KONA 3 or LHi cards, which enabled output on reference monitors and plasma screens, in addition to two Ki Pro Storage Modules plugged in via Firewire 800, and ran on a GigE network managed by two other Mac Pro workstations acting as metadata controllers running meta SAN. Two 16TB G-Speed XL FC RAID arrays were plugged into an ATTO 8Gbs switch and were mounted as a single drive on the desktops, and fed the 12-stream multiclips to the workstations. Within an hour, the team was able to transfer 36 hours of footage to the SAN.

A night of copious editing ensued. "Ki Pro enabled easy assembly and sharing for the online editor. Meeting the station's deadlines would have been impossible without the extreme compatibility between Final Cut and Ki Pro, the quick ingest time provided by the segmented recording, the multi-station transfers, and the media sharing capabilities of meta SAN," said Marano. "With help from Ki Pro thousands of Canadians were able to enjoy and appreciate a condensed induction gala featuring their favorite athletes in both official Canadian languages -- all within 24 hours following the event."