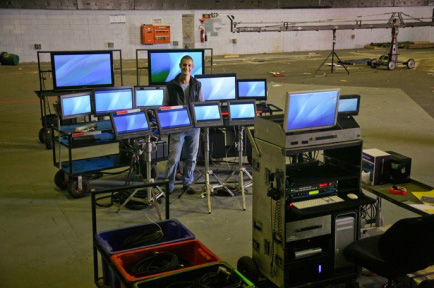 In his 20 year career as a Video Assist Operator and Digital Imaging Technician Michael Taylor has set up, managed, and lugged literally tons of monitors, cables, decks, converters and other related gear across some of Hollywood's biggest feature film sets. Avatar, Mission: Impossible II, The Chronicles of Narnia: The Lion, The Witch, and The Wardrobe; Star Wars: Episode III, all three Matrix movies, and most recently, The Chronicles of Narnia: The Voyage of the Dawn Treader - are just some of the 20+ films he has touched.

Recently, Michael has seen his charter expand from monitoring, recording, and playing back on-set takes and rehearsals to managing nearly full-fledged editing rooms on set. "The gear we provide gives filmmakers a quick reference facility where they can not only see on the monitor what the camera is seeing, but also record a rehearsal and play it back," Taylor noted. "Or they can take it further and have on-set editing facilities or even some basic visual effects compositing so they can check cuts and confirm that what they're shooting will composite nicely as a foreground element to the plates." All of this gear is built into road cases and set up on location, under a wide range of conditions.

Taylor's on-set rig was originally designed for projects shot on film. However, as his most recent project was shot with Sony F23 HD cameras, Taylor made the switch to HD. At the foundation of this veteran's new rig are a number of AJA solutions - the Ki Pro portable digital disk recorder; KONA 3, AJA's top-of-the-line video card for SD, HD, Dual Link 4:4:4 HD and 2K formats; and Hi5 and ADA4 Mini-Converters.

Specifically, Taylor's new HD setup included the AJA Ki Pro running on a QTake HD video assist system along with a KONA 3 card on a Mac Pro, also running Final Cut Pro. He used a string of AJA Mini-Converters on a Codex system for DPX capture directly from the Sony F23 cameras, and an AJA Hi5 converter for playback on plasma monitors that were fed from the Ki Pro/QTake system. With Ki Pro, Taylor was able to bounce the media generated by the QTake system through the KONA card in and out of Final Cut, and the mini converters enabled him to distribute a range of different types of signals around the set.

"Ki Pro gives me a convenient way to manage information. It's almost like a flash card. You plug it in, record stuff, pull it out, put it somewhere else, and play back out on other end. We had three main units all over the place, shooting scenes from multiple angles. If the director or DP needed that main unit material, we'd bounce it around with Ki Pro."

The Ki Pro helped Taylor give the production an 'instant dailies' solution as well. "I took the Pro Res QuickTimes when I shot master dialogue frames, and copied them so that they could be accessed off the Ki Pro to reference eyelines, for example. We had a complete copy of everything that was shot, all in one place, and we could find any shot we needed very, very quickly."

On the Australian outback sets of his most recent project, Taylor also used Ki Pro as his 'run and gun' HD recording deck. "If you have to go charging off into some type of environment like a jungle, a lake, or a tracking vehicle that you can't get a large piece of equipment attached to, the Ki Pro is a fantastic portable video assist solution. It's solid."

In fact, Taylor's whole HD rig was thoroughly battle tested in a quarry, a speedboat, and a beach during a sandstorm. "I've had the KONA card in the field in all sorts of craziness in terms of weather, dust, etcetera, too, and it was completely solid," he added.

Remarking on the quality of output of his new HD rig, Taylor said, "The KONA card is HOT! We're talking dual SD/HD-SDI outputs. You hook that thing up to a powerful enough computer with enough drive space and you're out there recording uncompressed HD that can be played out on a seven-foot screen. The Apple Pro Res coding is fantastic."

Taylor notes that while the Ki Pro - and all of the AJA solutions on his new rig -- bring him many new capabilities, none would be relevant without the most important attribute: affordability. "The most significant thing about the Ki Pro is its price point. It allows a guy like me doing the video assist to move to an HD workflow rather than remaining in the SD space. That is significant."

The AJA Ki Pro is a portable, rugged tapeless video recording device that records high-quality Apple ProRes 422 QuickTime files onto computer-friendly media. Because it features SD/HD-SDI, HDMI, and analog inputs, users can interface with virtually any type of camera they may own or rent. Ki Pro's numerous simultaneous outputs enable flexible monitoring, connecting to both professional and consumer monitors. Intuitive to operate, Ki Pro's familiar VTR-like buttons provide immediate controls for basic operation. From a distance, users can control operations from a laptop or iPhone from a web browser via ethernet or WiFi.

AJA's Mini-Converters are available in both HD and SDI product lines, with a full range of conversion and other capabilities.