* Pricing is for US only. International pricing will vary.

HELO Plus is a compact, advanced H.264 streaming and recording stand-alone appliance. HELO Plus offers both SDI and HDMI I/O with the capability to stream up to 1080p60 to a Content Delivery Network and record simultaneously. Two separate streaming destinations can be set up and recordings can be made to a combination of SD card, USB storage and NFS or CIFS network storage. HELO Plus also provides Picture-In-Picture and graphics functionality in hardware for compelling presentations made simple.

Take a look into the HELO Plus and its exciting features in this informative video.

HELO Plus is compact, with a very small desktop footprint.  It offers stand-alone capabilities with stream and record buttons on the front of the unit as well as LED indicators. Audio level meters provide valuable feedback about incoming audio.

HELO Plus is fanless and silent, allowing it to be used almost anywhere without fear of introducing noise. SD card and USB ports are also situated on the front of the unit for easy access.

HELO Plus can be easily configured remotely on a standard web browser, via the Ethernet connection, and using a desktop or laptop computer. Every function of HELO Plus is accessible in the WebUI, with multiple HELO Plus devices being easily controllable via a tabbed browser window. Once set up to your requirements, HELO Plus can also be controlled via the stream and record buttons on the front of the device, with audio level LED meters providing feedback for monitoring, or the system can be controlled directly from the included web-based UI. There’s also the option for remote control via the system’s integrated REST API.

SRT is an open source video transport protocol and technology stack, developed and pioneered by Haivision, that optimizes streaming performance across unpredictable networks with secure streams and easy firewall traversal, bringing the best quality live video over the worst networks.

HELO Plus includes SRT (plus encryption) to ensure you are well positioned to deliver streaming video content securely, with low latency and secure reliability.

HELO Plus Connections and Indicators

HELO Plus offers all the professional digital I/O you need to make HELO Plus the heart of your streaming service. The easy to access front panel buttons make starting and stopping your stream simple.

Front of the HELO Plus:

Rear of the HELO Plus:

HELO Plus' small footprint form factor and silent operation allow it to fit on any desktop, with the operator using the easy to access front panel start/stop buttons. But just as simply, HELO Plus can be operated remotely from a desktop or laptop computer via Ethernet, which is especially useful for multiple HELO Plus use cases.

HELO Plus is designed to give you the flexibility to configure and deploy HELO Plus to your needs in the field, home, or studio. HELO Plus fits any streaming need imaginable, from sports, news, creator, education, eSports, remote workflows, and many more.

REST API capabilities provide control for all functions of the HELO Plus, regardless of the scenario, allowing for user developed integration and automation.

HELO Plus has the capability to stream and record up to 1080p60 simultaneously in the following combinations:

Having a recorded backup of the video stream provides a high quality H.264 version for editing applications, with the most suitable storage being selected. Network storage may make more sense for edit sharing, while an SD card or USB recording provides an easy takeaway for clients or editors.

The schedule may be programmed locally through HELO Plus' web UI, importing .ics files, or linking to external calendar providers such as Google Calendar.

HELO Plus brings the exciting layouts feature, allowing multiple inputs to be combined into a single screen with a graphic element overlay. A layout enables the user to combine the SDI input and the HDMI input into a single output stream and then add a graphic (video + key) into that composite. The layout can have up to 3 layers, and their priority can be arbitrarily adjusted to suit the customer’s needs.

In addition to the layering engine, both the SDI and the HDMI layers can be arbitrarily downscaled and positioned anywhere in the frame. Effectively, each live video source can be used in its picture-in-picture (PiP) element.

The system also has an internal matte generator, which can be used as the background. In this way, the graphic can be keyed over the dual PiP images, which are “over” a flat matte background.

The system can accurately switch from one layout to another frame, allowing the user to “cut” between layouts during a streaming session. Layouts are stored in one of the 20 Presets, allowing users to recall all of the parameters needed for a specific purpose. There are 10 layouts stored in each preset, so the user recalls the show’s preset and can then switch between those 10 layouts at will.

The graphics system is equally impressive - The system stores 20 images in its internal, non-volatile memory.

HELO Plus has dual encoders for streaming outputs, giving the flexibility to create different output settings from a single input source. The two encoders can have different packaging settings and different output frame sizes, which means that a single content stream can be presented in two ways to serve a wider audience.

It can also be duplicated across both encoders for added resilience. Either of these encoder outputs can serve as the source for the HELO Plus recording system as well.

The simplified signal flow for video within HELO Plus neatly highlights the flexibility of the device. Tracing a simple pathway for each video input illustrates the encoder, graphics and recording options.

In this use case, a sports channel 1080p59.94 video feed is being commentated on in the studio, with the video output and embedded audio being passed directly to the SDI input of the HELO Plus. The HELO Plus streaming content is monitored using an HDMI monitor and headphones.

The first encoder is set to encode the video and audio as an RTMP stream, while the second encoder is set to output an HLS stream instead. HELO Plus allows high quality sports feeds with higher frame rates of 59.94 and 60 to be encoded easily, with greater detail and motion than lower frame rate content offering an enhanced user experience.

In this use case, the live event PGM feed is passed to the SDI input of the HELO Plus. The HELO Plus streaming content is monitored using an HDMI monitor and headphones. The first encoder is set to output an RTMPS stream, while the second encoder is recording directly to an SD card as a backup for later editorial use.

In this use case, a college lecture is taking place. The HELO Plus receives video over SDI of the lecturer. At the same time, the presentation on the lecturer’s laptop is being output via HDMI to the HDMI in of the HELO Plus.

The HELO Plus streaming content is monitored using an HDMI monitor and headphones. The HELO Plus has been set up to create a layout for picture-in-picture. In this case, the lecturer's video is scaled down and moved to the lower right corner as an overlay of the presentation.

This picture in picture combined output is passed to both encoders, with the first encoder offering a stream for students outside the facility via RTMP. At the same time, the second encoder utilizes HLS for delivery to a college breakout area.

In this use case, the switched video output of a studio production is being recorded as a ProRes master on an AJA Ki Pro Ultra 12G. The Ki Pro Ultra 12G passes the video and audio via SDI to a HELO Plus. The HELO Plus is configured for a layout that shows the production video scaled down with a composite background provided by the frame store.

Grouping HELO Plus with other AJA video devices offers even more sophisticated control, with simultaneous synchronization for recording and streaming across multiple devices.

The four HELO Plus devices are configured as a group, with HELO Plus #1 set to be the leader. Pressing record or stream on HELO Plus #1 triggers all the HELO Plus devices to stream to two alternate formats, 1080p29.97 and 720p29.97, keeping start and stop streaming for the group in sync across the various streams.

Group functionality across multiple HELO Plus devices is easily achieved on standard infrastructure, meaning the devices do not have to be physically near each other to function as though they were connected side-by-side. 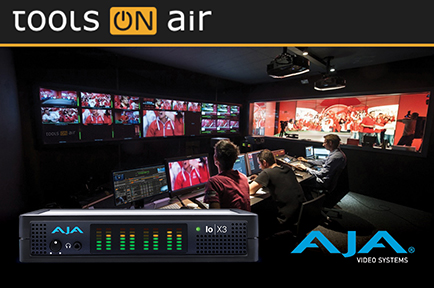 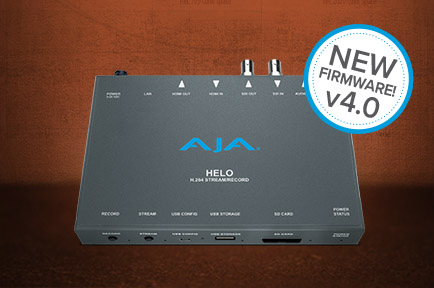 AJA’s technical support is recognized as among the best in the industry and is available to all AJA customers. If you need assistance with any aspect of your HELO Plus installation, configuration, operation, or encounter any technical issue, AJA Support will work with you to get up and running.

HELO products are covered by a generous three year warranty.

Ask us a question

Register your AJA product to help us provide you with the highest quality technical assistance.