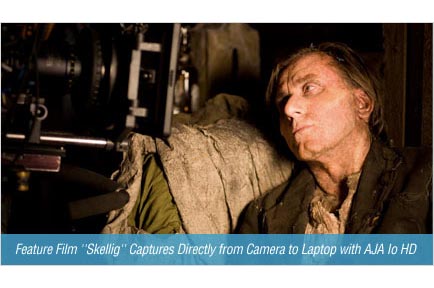 “Skellig” is a children’s fantasy film directed by Annabel Jankel for Feel Films and will have its UK premiere on Sky1 in April 2009. The coming-of-age drama stars Tim Roth and is adapted from David Almond’s award-winning novel of the same name.

Keith Mottram is the visual effects editor for the project, and selected the film’s equipment list to maintain a fully HD pipeline from beginning to end. “On set we shot with the Arri D-21s and the recording medium for DI purposes was the Sony SR. Simultaneously we were using two AJA Io HDs to record the material in HD to two Apple laptops, and everything we did up until the final color grade tapped this HD capture workflow,” explained Mottram.

“Working with Io HD enabled us to have immediate access to our dailies. Having the Io HD for on-set playback in full high definition also proved to be an amazing advantage for both the actors and the director. We had 26-inch screens on set equipped for on-demand, immediate HD playback. This allowed us to review material on set while considering edits and shot matching, enabling us to go back to editorial within minutes of it being shot to tweak and refine. The immediacy of this workflow saved a lot of time and money in that it could eliminate costly re-shoots because we knew exactly what we were getting as it was being captured,” Mottram continued.

On set the Io HD was integrated into a customized trolley/ingest station along with two Sony SR decks and two Apple laptops. One each of the AJA KONA 3 and KONA LHe cards were also used in each of the edit workstations. Material that was recorded to the laptops was transferred daily on portable Firewire drives to the edit suites. Since the files were ingested with the Io HD they were already logged, giving the team a head start editorially and making it easier to go through the footage since they already had the slate burned into a QuickTime.

About Io HD
Io HD brings HD editing to the MacBook Pro and Mac Pro utilizing Apple's ProRes 422 technology, while also supporting SD editing workflows. Io HD includes many high-end features such as Up-, Down-, and Cross-conversion, all at 10-bit hardware-based quality. Io HD offers unmatched connectivity via its myriad of professional analog and digital interfaces. Io HD is a portable device that works with Apple's Final Cut Pro for professional editing, and also with other QuickTime applications on Mac OS X for graphics, audio and digital content creation.