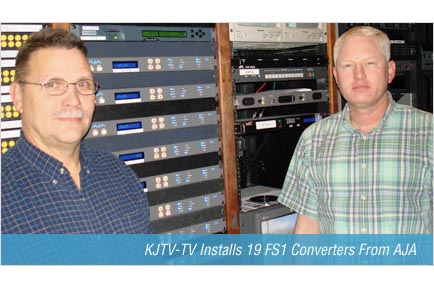 
AJA Video Systems, a leading manufacturer of professional video interface and conversion solutions, announced today that it has completed a sale of 19 FS1 converters to Fox affiliate KJTV-TV in Lubbock, TX via AJA reseller Lubbock Audio Visual. The FS1 is a universal HD and SD, audio and video frame synchronizer and converter supporting virtually any input or output format.

A Fox charter station, KJTV-TV has broadcast the network since its launch in 1986. In addition to Fox, the station’s studios also house affiliates of the AccuWeather Channel, MyNetworkTV, The CW, Telemundo and four radio stations. Station Engineer Winn Boedeker first joined KJTV-TV in 1997, and is currently overseeing KJTV-TV’s transition to HD with the reconfiguration of its entire master control operation.

“Because we’re operating five separate affiliates, we’re building multiple master controls, not just one,” Boedeker explains. “Using AJA’s FS1 converters along with other products, we’re integrating with each of our router systems, moving all of our stations to either SD or HD master control.”

Versatility and a low price tag were two of the FS1’s winning features for KJTV-TV. “The FS1 converter gives us the versatility we need to get everything up to 720p, and to provide our HD signal to the cable companies in the formats they need,” says Boedeker. “You can put the boxes just about anywhere, and set them up to do whatever you want. It’s easy in, easy out. There’s nothing else on the market at that price point that does what the FS1 does.”

“I really like the graphical interface,” Boedeker continues. “The GUI makes it easy for multiple people to access the unit and change configurations as needed. Other great features include the upgrade ability of the FS1’s software, the Proc Amp controls, which allow you to control color and video, and the fact that the FS1 embeds and disembeds audio. You can pretty much do whatever you want with the unit signal-wise, and it’s fairly simple to use.”

Boedeker also employs at least 30 of AJA’s mini-converters. “We have some of the analog-to-digital converters, and analog-to-digital embedders and dis-embedders placed throughout the building for equipment feeding our router. All of them are good at what they do. We’ve had very good performance out of every piece of AJA equipment we’re purchased.”