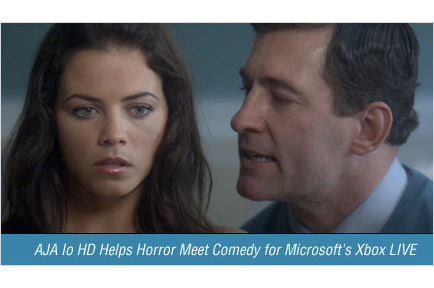 For "Horror Meets Comedy," a series of six short pilot films commissioned by Microsoft for Xbox LIVE, online director John Clisham joined a group of a-list and up-and-coming horror directors that included James Wan of "Saw," Andrew Douglas of "The Amityville Horror" remake and David Slade of "30 Days of Night." Clisham's directorial project, "Janitor," opened the series with its debut two days before Halloween, and received 16,000 downloads the first week alone. The nine-minute short, available to Xbox LIVE's 15 million subscribers, remained the number one download of the series through the end of 2008.

Clisham first started using the Io HD while on the job at James Cameron's production company, Lightstorm Entertainment, where he is currently working on the highly anticipated stereoscopic 3D film project, "Avatar." "I'd been drooling over the Io HD since it was first announced at NAB in 2007, and couldn't wait to get my hands on it," Clisham said. "At Lightstorm, we carry it wherever we go. It's perfect for those times when we have to get someone a file for approval and we need something portable we can record to quickly."

For "Janitor," Clisham and the rest of his production team gave the Io HD a thorough workout. "I thought it would be really cool to test it out while shooting under extreme conditions," Clisham explained. "On set, we had a secondary output going from the camera straight to a Mac system. We kept all of the material on the hard drive and when we got back to the edit suite, everything was already captured and was right there. It was like instantaneous editing—I didn't have to log, didn't have to capture—I just pulled all of it into sequence."

"The Io HD worked so well, that half the time we ended up using it for playback because it was right there and we could just hop right into Final Cut and it would play for us," Clisham continued. "We really wanted to put it through its paces. At one point we ran the footage through a Christie CP2000 DLP projector, and it completely held up. I'd take my camera original from the HDCAM deck and run it through the Io HD input and didn't see any degradation or compression artifacts."

Clisham also found that using the Io HD allowed him to hand off ProRes files directly to the VFX artists to work from. "I didn't have to find another system to capture uncompressed frames, which saved us a lot of time and money," Clisham said. "There are a lot of other solutions out there, but nothing else is super easy out of the box like the Io HD. It's like you just add your movie, and it's done."

Clisham and the rest of the production team for "The Janitor" were extremely happy with the results. "The Io HD helped us maintain the highest level of quality," Clisham declared. "I was able to do the entire project in 1080, and it looked great. I didn't have to down-convert and edit on a 720 timeline and have it conformed elsewhere."

"The project held up extremely well compared to the other films in the series and I think that's largely because of the workflow. The other filmmakers used different processes, for a number of reasons, but none were able to handle the amount of data we were pushing through our Macs. I am completely sold on the workflow," Clisham concluded. "It has to be ProRes, it has to be Final Cut, and it has to be Io HD."