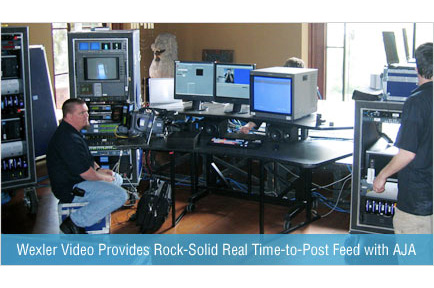 L.A.-based rental powerhouse Wexler is no stranger to the realities of today's television. The company has provided production and post-production solutions to help meet the tricky logistics and turnarounds of programs from "America's Next Top Model" to "The Amazing Race."

For "Rock Star: INXS," a show from Mark Burnett Productions ("Survivor," "The Apprentice") that follows contestants as they live and compete amongst one another for a chance of becoming the band's new lead, the task was to provide a "virtual control room" to facilitate completion of an episode, together with rapid remote viewing of new incoming footage, in near real time. Shot material needed to fl ow from a fi xed shooting location (the Hollywood mansion housing the contest hopefuls) to editors, loggers and story producers off site. The setup needed to be hitch-free and dependable around the clock, as the series was being captured and edited for airing an unprecedented three consecutive nights a week.

The Solution:
Wexler built a pipeline around the AJA Io system and a variety of wireless technologies to transmit footage live to the post-production team. A wireless feed was established between the camera on location and off-site editorial using a broadcast-quality microwave signal. With the AJA system as the connector, composite video was brought in and output over FireWire DV to a rack of Apple Macintosh G4s. From there, the media was streamed in real time over the point-to-point link to CBS Studios, where an Intel six-way split allowed the footage to be sent to the different desktops of key collaborators.

"The tight timelines and ambitious format of 'Rock Star: INXS' meant that the producers and editors were needing to turn around a show nearly in real time while looking at everything on set," said Tyler Knight, Manager of Broadcast IT, Wexler. "By being able to watch the material and the events as they were unfolding, they could see what the contestants were doing and how they were feeling and use these within the plotline or as the crux of the entire episode."

"The AJA Io system was a huge win on this project," Knight continued. "It was the only solution that had the feature set and robustness to keep our live feed going 24 hours a day seven days a week for three months. On top of sheer performance, I really like the fl exibility Io provides to our rental business. Here, it was a great fi t for a live feed scenario, but I can also use it in many other instances, like setting up a Final Cut Pro editing station or a streaming or encoding workflow