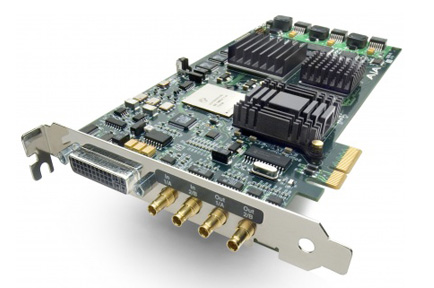 Timeline Television Ltd., based in London’s Ealing Studios, was founded in 2007 by a group of broadcasting industry veterans that includes Timeline Managing Director Dan McDonnell, who was previously with the BBC for over 17 years. “We’ve been pushing tapeless workflows in the UK since long before Timeline existed as an entity and AJA KONA cards have been a part of that since they were first introduced,” McDonnell said. “AJA’s early support of IMX and ProRes codecs put them well ahead of the competition in terms of innovation, and that continuing innovation keeps them at the top of our list for tapeless broadcast workflows.”

Recent Timeline projects employing AJA tools include the 2009 Wimbledon Tennis and British Golf Open Championships for the BBC, as well as the July 2008 Dubai launch of the legendary RMS Queen Elizabeth II (QEII) cruise liner as a floating luxury hotel.

Timeline’s head of post production, Charlie Tear, commented that 2009 marked the first year that multiple broadcasters were able to work off of a single shared EVS IPDirector system in HD at Wimbledon: “Both KONA and the FS1 came into play at Wimbledon, as they do on virtually all of our projects. We had eight FCP edit suites set up with KONA 3 cards for ingest and playback, and used 10 FS1s for de-embedding audio and to make conversions from HD to SD. The KONA cards play well with the EVS servers and make ingest and publishing media from system to system effortless.”

For the British Open, Timeline provided IMG, the BBC and The Golf Channel with both MCR and EVS server operations, both of which relied heavily on the FS1 frame syncs and KONA 3 video cards. “We had four edit suites outfitted with KONA 3 cards working in HD, and were handling all the editing for the Golf Open web site. It was a very high-pressure situation with hourly updates, interviews and more. We needed something that would be ready instantly and was one hundred percent reliable,” McDonnell explained. “AJA FS1s were also used to embed several channels of international commentary to the outgoing satellite feeds, again without problems or complication.”

For the Dubai launch of the QEII, Timeline once again provided MCR and server operations. Footage at the event was captured in high definition, but many broadcasters were still required to deliver in SD. Timeline set up two Final Cut Pro edit suites outfitted with KONA 3 cards, and once again relied on the FSI frame syncs for embedding and de-embedding audio and converting the broadcast signal from HD to SD.

“We use AJA cards because they give us the best quality,” Tear concluded. “And the FS1 offers just as many features as other solutions that cost much more. In terms of broadcast infrastructure, AJA tools are very reasonably priced for the features they provide and we’ve found them to be very reliable. We wouldn’t use them if it was any other way.”