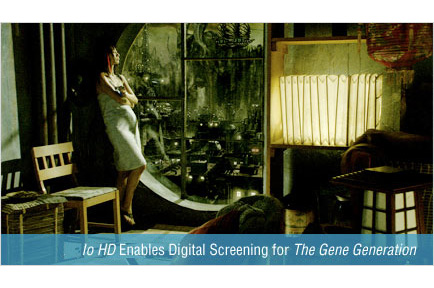 AJA Video, a leading manufacturer of professional video interface and conversion solutions, today announced that its award-winning Io HD was used to facilitate both test and cast and crew screenings of the sci-fi indie feature, "The Gene Generation." Io HD, the first device to natively support Apple's newly introduced ProRes 422 post production format in hardware, delivers HD editing to the MacBook Pro and Mac Pro via its unique Firewire 800 (IEEE-1394b) interface. Starring Ling Bai and Perry Shen with a supporting role by Faye Dunaway, "The Gene Generation" will premiere in spring 2008.

The effects-heavy feature, based on the "DNA Hacker Chronicles" graphic novel series, presents a futuristic world populated with deadly DNA Hackers and the Assassins who hunt them. Keith Collea, co-writer and producer for "The Gene Generation," also served as Technical Supervisor for the project. He used AJA's Io HD as an integral part of a fully portable movie projection system that allowed the film to be projected on a Sony 4K digital cinema projector at the American Film Institute's Mark Goodson Theater without the use of tape-based VTR for playback.

"Our goal was to create an 'over-the-shoulder' projection system, one that fit entirely into a shoulder bag I could carry on my motorcycle and that would allow us to just walk in, plug in a cable, and walk out again-no tapes to back up, no heavy equipment to schlep, no truck to rent," relates Collea. "Using the Io HD, an Apple Intel MacBook Pro and a G-Tech G-DRIVE, we were able to do just that and nobody could see the difference. It saved us time and money, and the picture quality was better than if it came off of tape. It was just incredible."

"I'm a huge AJA fan," says Collea. "Their products are rock-solid dependable and the customer service is beyond stellar - there's never been a time when I couldn't get someone on the phone to help with any issue I might have, even with non-AJA related problems. It's also great that AJA is so closely associated with Apple. The moment Apple comes out with new software updates, AJA is ready with new drivers. Everything is in sync, which makes my life so much easier."

Io HD is the next-generation of the popular Io video ingest and output devices introduced by AJA four years ago. Io HD brings HD editing to the MacBook Pro and Mac Pro utilizing Apple's ProRes 422 technology, while also supporting SD editing workflows. Io HD includes many high-end features such as Up-, Down-, and Cross-conversion, all at 10-bit hardware-based quality. Io HD offers unmatched connectivity via its myriad of professional analog and digital interfaces. Io HD is a portable device that works with Apple's new Final Cut Pro 6 for professional editing, and also with other QuickTime applications on Mac OS X for graphics, audio and digital content creation.

Io HD leverages Apple's new ProRes 422 format and is the first device to do so natively in hardware, freeing up system processors for other production tasks, and allowing true 10-bit editing on a MacBook Pro. Io HD supports both Apple ProRes 422 and ProRes 422 HQ, in 720 and 1080 HD, all in real time, full-resolution 10-bit 4:2:2. ProRes 422 capture (compression) and playback (decompression) are all handled directly in the Io HD.

About Io HD
Along with unparalleled video and audio connectivity, Io HD includes a similar feature set to AJA's industry-leading KONA lineup; 10-bit hardware-based up-conversion, cross-conversion, and down-conversion, all performed in real time. Io HD runs on a new AJA-built driver, similar to the KONA driver, supporting features such as Core Audio, and very low latency. Within its portable and high style chassis, Io HD offers SD/HD analog inputs and outputs, SD/HD digital I/O including HD-SDI and HDMI, as well as RS-422, Genlock, Balanced analog and AES audio, and even LTC timecode connections. Io HD is available through AJA's global channel of dealers and integrators at an MSRP of $3495.00 US, and includes AJA's 3-year international warranty and support.