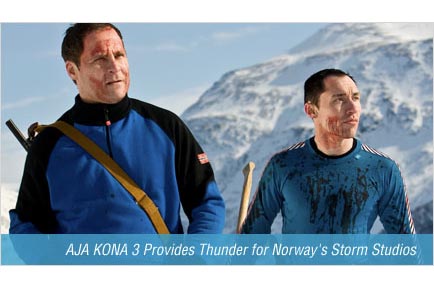 Recent projects at Storm Studios employing AJA’s KONA 3 include the 2008 Academy Award-winning animated short, “Peter and the Wolf,” and the 2009 feature, “Dead Snow,” which premiered at this year’s Sundance Film Festival. The critically acclaimed “Peter and the Wolf,” directed by Suzie Templeton, premiered in 2006 at the Royal Albert Hall in London, accompanied by live music from the Philharmonia Orchestra. In addition to winning the Oscar, the film also received the Annecy Cristal award and Audience award at the prestigious Annecy International Animated Film Festival in France in 2007. “Dead Snow” is a dark comedy/horror movie featuring a group of Norwegian students on a ski vacation turned horrific. The film, written and directed by Tommy Wirkola, has been picked up for worldwide distribution by IFC Films.

“We chose to go with AJA for two key reasons: reliability and functionality,” said Storm Studios production manager Tom Joelsen, who also served as visual effects and postproduction coordinator on “Peter and the Wolf.” “The KONA 3 offers a very reliable and consistent workflow, with all of the up- and down-conversion capabilities our pipeline requires.”

With two suites for online editing and color grading, Storm Studios relies on KONA 3 to transfer material from the edit bay directly to tape or previews in the facility’s in-house HD projection theater. “We mainly use the KONA 3 as an SDI transfer tool, but are looking forward to trying out the 2K data transfer feature as soon as we have the right project,” Joelsen explained. “We also use KONA’s SDI/DVI converter in our in-house screening room, which gives us the ability to watch material directly from the online suite on our HD projector.”

“The KONA 3 is essential to our online work, both in ingest and export processes,” Joelsen continued. “Most of our masters go to HDCAM SR at full HD 1920 x 1080 with eight tracks of sound. The KONA 3 gives us all the flexibility we expect from a high-end professional system. In some cases we need to up-convert the original material from our Apple Final Cut Pro suite. For down-conversions we mostly use the HDCAM SR play-in play-out process, but AJA KONA also has excellent down-converter functions that we have found very useful.”

Storm Studios continues to rely on AJA products to deliver the high quality work clients demand. “We have just completed a feature length documentary shot on DVCPRO HD,” Joelsen detailed. Being shot and onlined at 720p, it needed to be up-converted to 1080p for cinema release. We used the AJA KONA 3 card for all the up-conversions prior to delivery on HDCAM SR tape, with splendid results. We also recently did post work on a short shot on DVCAM, which needed to be up-converted to full HD for theatrical release. Again we used AJA’s KONA card for the up-conversions, aiming for a sort of 16mm look in the final grade. The client was very happy with the end result.”

“AJA saves us time and money because of its consistency,” concluded Joelsen. “There is nothing more frustrating and time consuming in the final stages of an online edit than unreliable and inconsistent equipment. We have tried other solutions for our online pipeline but so far have found AJA’s KONA 3 to be the most reliable and consistent."

About KONA3
KONA 3 is the ultimate uncompressed capture card for seamless operation with PCI Express (PCIe) Mac Pro systems and Apple Final Cut Pro. Supporting any uncompressed SD or HD format, including Dual Link HD and 2K, KONA 3 captures and plays back uncompressed 10-bit and 8-bit digital video and 24-bit digital audio, providing unparalleled power and workflow efficiency. KONA 3 also includes a variety of 10-bit broadcast-quality features, such as hardware-based up-, down-, and cross-conversion to and from HD, and adds a live hardware HD/SD keyer for compositing bugs, live clips, and other elements over video.