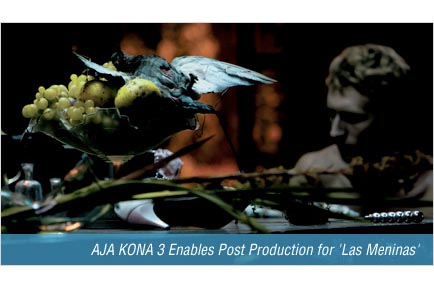 AJA Video Systems, a leading manufacturer of professional video interface and conversion solutions, announced today that the KONA 3 video capture and playback card was used on “Las Meninas,” the first full-length feature film from the Ukraine to employ an all-digital workflow. KONA 3 is AJA’s top-of-the-line uncompressed capture card for SD, HD, Dual Link HD and 2K for PCI Express (PCIe) Apple Mac Pro systems, and was an integral part of the Final Cut Pro editing pipeline for the film, which premiered in Tiger Awards Competition at the 37th Rotterdam International Film Festival on January 25, 2008.

Written, directed and produced by Ukrainian painter and performance artist Ihor Podolchak, and shot by cinematographer Serhiy Mykhalchuk, “Las Meninas” is the first feature-length film from the Ukraine to contend for first prize in the Rotterdam International Film Festival, the main international forum for avant-garde and art-house cinema. The film has been widely exhibited since its premiere, also appearing at these international film festivals:

Shot with the Thomson Viper Filmstream and recorded to HD CAM SR tape, footage for “Las Meninas” was captured with AJA’s KONA 3 video capture and playback card at 4:4:4 Log RGB. The film was edited on an Apple Mac Pro using Final Cut Pro, and color corrected with Color, all of which was processed using the KONA 3.

“The KONA 3 was the backbone of our editing pipeline,” commented Podolchak. “It did everything we needed. Not only was the KONA 3 extremely stable and easy to use, it also allowed us to develop the first fully digital production and post production workflow ever for a feature film in the Ukraine. We couldn’t have done that without it.”