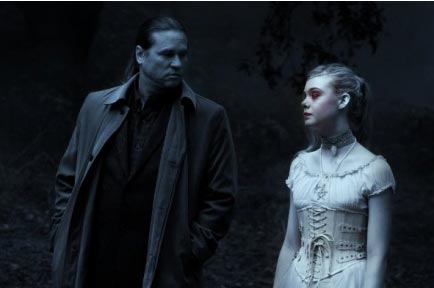 Twixt, staring Val Kilmer and Elle Fanning, is a 2D feature that includes six minutes of stereo 3D in various sequences throughout the film. During post-production American Zoetrope had a SIM2 projector for screenings and needed a solution to feed it the proper signal for playback of stereo 3D material. “We had heard about AJA’s Hi5-3D and it looked like exactly what we needed,” said Post Production Supervisor James Mockoski.

AJA’s Hi5-3D Mini-Converter automatically combines left and right-eye SDI inputs into stereo 3D output that can be quickly and easily viewed on a 3D monitor or projector. “The 3D company and our VFX houses sent us left eye and right eye material, which we put through the Hi5-3D using its two SDI inputs, and sent a side-by-side signal out. It was a convenient, easy way to run 3D previews to check masks and titles,” said Post Production Manager Sin Cohen. “We also got a lot of use out of it as an SDI/HDMI converter to get signals from SDI to the projector. It was really handy to have that option in a pinch.”

“We’re up in Napa, and it was great to be able to do stereo reviews right here in our own facility rather than having to drive into the city for them,” Mockoski noted.

Twixt was shot using a combination of Sony and RED digital cameras and edited using seven Apple Final Cut Pro systems equipped with AJA KONA cards. An AJA Io HD device floated among editing systems, laptops and screens to enable on-the-spot playback. American Zoetrope is also considering bringing the Hi5-3D along for its road show screenings to potential distributors, to enable stereo review on the road. The AJA Hi5-3D is available for $495.

Since 1993, AJA Video has been a leading manufacturer of high-quality and cost-effective digital video interface, conversion, acquisition and Desktop solutions supporting the professional broadcast and post- production markets. With headquarters in Grass Valley, California, AJA maintains an extensive sales channel of resellers and systems integrators around the world. For further information, please see our website www.aja.com.