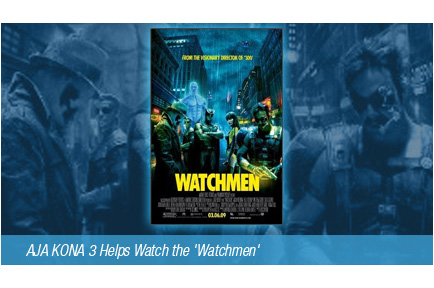 Based on the graphic novel co-created and illustrated by Dave Gibbons, “Watchmen” is a complex, multi-layered story set in an alternate 1985 America in which costumed superheroes are part of the fabric of everyday society. Their mission is to watch over humanity...but who is watching the Watchmen?

“The challenge was that the filmmakers needed a 2K playback system that would also allow them to sync audio and make edits on the fly,” Blatt explained. “The high volume of CG work meant that VFX shots had to be viewed in context, including with sound. Some of the shots were very short—just a few frames even—making them difficult to review on an Avid system. AJA KONA 3 and Apple Final Cut Pro gave us exactly what we needed.”

To create 2K digital dailies for reviewing VFX shots, Blatt converted 2K DPX files into QuickTime format using AJA’s unique DPX translator application and then imported them into Final Cut Pro via the AJA KONA 3 video card. Shots were assembled according to an EDL in Final Cut Pro along with the audio files, creating a 2K sequence. The files were then loaded onto a hard drive and handed off to White for projection at Warner Bros.

White, in turn, employed an additional KONA 3 card at the Warner Bros. facility in order to view the 2K dailies. “The AJA KONA 3 cards are stable and very reliable,” White commented. “They were easy to integrate into our system, and allowed the ‘Watchmen’ filmmakers to create dailies that would sync with audio using a Mac-based workflow. And—one of my favorite features—the cards allowed us to playback 2K DPX files and maintain a consistent setup.

“AJA’s technical support was also outstanding,” concluded White. “They helped us set up the entire process, and were there for us every step of the way.”