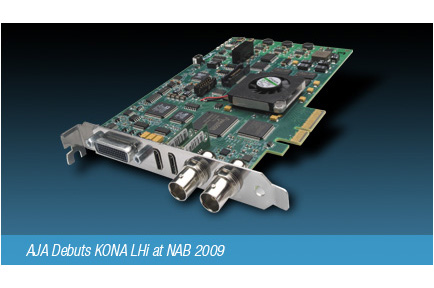 Mac Video Capture and Playback Card Adds Support for HDMI and 3G SDI,and 10-bit Up, Down, and Cross-Convert.

“KONA LHi represents the next evolution of our massively popular KONA LHe. With the addition of HDMI and 3G SDI support along with up, cross and down-convert, we’re offering even more workflow solutions for our customers,” said Nick Rashby, President, AJA Video. “The KONA LHi delivers a huge amount of functionality in a very cost-effective package.”

The AJA KONA LHi allows editing, monitoring and mastering of professional quality video in an affordable, easy to use product. Since all of KONA LHi’s conversions are hardware-based, they are available all the time—during ingest or playback. Outputs can be configured independently allowing users to have simultaneous HD and SD output—or two different types of HD, 720 or 1080, output via cross-conversion.

The KONA LHi is available immediately for an MSRP of $1495 via AJA’s worldwide network of channel partners. The optional KLHi-Box breakout box is also available now for $349 MSRP.

For a limited time, the KONA LHe uncompressed video capture and playback card will be available at the special price of $1295, a saving of almost $500.