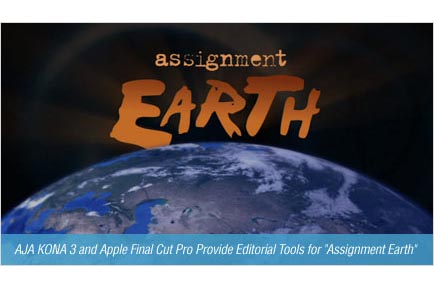 Walter Biscardi, owner of Biscardi Creative Media in Atlanta, GA, developed a Final Cut Pro editing and post workflow for “Assignment Earth” that allowed him to work quickly and easily with the large variety of formats in which the series was shot. “The KONA’s ability to do cross-conversions is crucial to this show,” Biscardi explains. “We shot in just about every HD format available in this particular run of the series. The KONA 3 allowed us to convert everything to DVC PRO HD at 720p, and then go out to our master at 1080i, all in real time. The 720p files are much smaller than the 1080i files, so we save on storage space during editing and the whole show transfers over beautifully.”

"The most important feature of the KONA 3 is that it allows us to do anything to anything," Biscardi continues. "We can bring in footage at any rate. Two of the episodes required us to bring in archived material from Beta SX and Beta SP, and the KONA 3 does a great job converting those formats to HD. For analog sources, we used an AJA HD10AVA digital converter. The fact that we can up-convert, cross-convert and down-convert, all in real time and in full broadcast quality, is why we choose KONA over everything else. There are other products out there but not everyone delivers the amount of real time capabilities and image quality as KONA.”

The AJA Control Panel application is another feature of the KONA 3 Biscardi has come to rely on. “I love the independent control panel because it allows the KONA 3 to work independently from Final Cut Pro. You install it, put in the drivers and then forget all about it,” Biscardi says. “There’s no worrying about whether you can or cannot do something; you don’t have to think about it at all you’re just free to work.”

Biscardi also depends on the input passthrough feature, which allows him to run KONA 3 independently of a computer. “Having an independent hardware conversion box is a huge asset that almost no one ever talks about,” says Biscardi. “If you have high-def tapes you need to down-convert to Beta SP for one client, you just put the KONA 3 into input passthrough mode and go deck-to-deck while you continue to edit in Final Cut Pro for another client. I can also use the input passthrough feature to capture material from my high-def deck directly down into a Beta deck in real time without ever going into Final Cut Pro. Or I can go the other way around, always in real time, and without going into the system.”