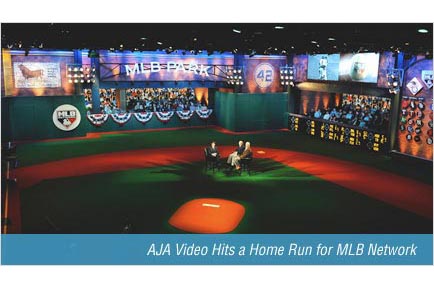 
AJA Video Systems, a leading manufacturer of professional video interface and conversion solutions, announced today that its KONA 3 video capture and playback cards and mini-converters are in use as part of a tapeless workflow at the newly launched MLB Network. KONA 3 is AJA’s top-of-the-line uncompressed capture card for SD, HD, and Dual Link 4:4:4 HD for Apple Mac Pro systems, and is an integral part of the network facility’s editing environment.

Fourteen of the KONA 3 video capture and playback cards are connected to Apple Final Cut Pro workstations set up for editing all of the non-live long format programming at MLB Networks. Another six are in use at Adobe Premiere and After Effects workstations for media rendering, and the final two are hooked up to Autodesk Smoke and Flame systems.

“Designing AJA’s KONA cards into our creative areas and edit suites was an easy decision,” said Mark Haden, Vice President of Engineering and IT at MLB Network. “AJA products not only work well with Final Cut Pro and other Apple equipment, but are literally plug-and-play. The KONA 3’s ability to process uncompressed HD video in real time has definitely helped to boost our creative services workflow. And the fact that it can provide simultaneous outputs in standard-def and HD is a big plus right out of the gate.”

To support a large state-of-the-art studio set and production space, AJA mini-converters used for monitoring and playback have also been deployed throughout the facility. “The majority of the on-set monitoring is fed live via the converters,” Haden said. “They’ve been working perfectly. They make the images in the studio as seen on camera crisp and clean keeping the true 720p HD/SDI quality intact. Another advantage is their reduced size and heat output.”

About KONA
KONA 3 is the ultimate uncompressed capture card for seamless operation with PCI Express (PCIe) Mac Pro systems and Apple Final Cut Pro. Supporting any uncompressed SD or HD format, including Dual Link HD and 2K, KONA 3 captures and plays back uncompressed 10-bit and 8-bit digital video and 24-bit digital audio, providing unparalleled power and workflow efficiency. KONA 3 also includes a variety of 10-bit broadcast-quality features, such as hardware-based up-, down-, and cross-conversion to and from HD, and adds a live hardware HD/SD keyer for compositing bugs, live clips, and other elements over video.

About AJA Video Systems, Inc.
Since 1993, AJA Video has been a leading manufacturer of high-quality and cost-effective digital video interface, conversion and Desktop solutions supporting the professional broadcast and post-production markets. With headquarters in Grass Valley, California, AJA maintains an extensive retail sales channel of dealers and system integrators around the world. For further information, please see our website www.aja.com.