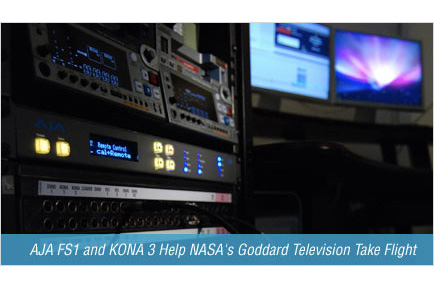 To support the Goddard Space Flight Center’s mission to expand the public’s knowledge of the universe, Goddard Television produces and distributes original content to educators, news media, museums and other organizations interested in exploring and understanding Earth and space, and has shared its missions, programs, discoveries, experts and facilities with 245 million viewers around the globe.

Producer and Video Editor Stuart Snodgrass started his career at NASA as an intern in 1997, and has worked with Goddard Television since 2007. He described the facility’s recent transition to HD production, as well as the adoption of an Apple Final Cut Pro workflow. “We were primarily an Avid shop, but in recent years the people we were bringing in were Final Cut Pro users, so we’ve slowly gone from two Avid edit bays to three Final Cut Pro workstations,” Snodgrass explained. “Ever since we made the switch to HD, we’ve needed strong input and output that offered a variety of flavors. AJA products just made sense—they were the perfect fit.”

Shooting in HD with Panasonic P2 and VariCam cameras, Goddard Television production crews travel to NASA scientists and engineers in order to capture footage of projects such as the Hubble Space Telescope’s Service Mission Four. “For the first time, we’re delving more into the web,” said Snodgrass. “We produced 24 short packages focused on each part of the mission, and made them available for download on our site.”

Using a mix of new material shot in HD along with older SD footage, Snodgrass and the other Goddard Television editors depend on AJA’s KONA 3 to ingest material from the HD cameras into Final Cut Pro and convert it to DVCPRO HD for editing. Archived SD footage is up-converted to HD using AJA’s FS1 converter, which quickly and easily converts footage to a variety of formats, adding side cut or letterboxed modes as needed.

“The FS1 is an amazing converter tool that can do just about anything,” Snodgrass said. “My favorite thing is how I can use it along with our video switcher to down-convert our signal and send it directly to our video engineering department, which in turn sends it to headquarters in Washington D.C. Now we never have to use tape. We just pick up the phone and let them know we have a signal ready.”

“Rather than just do one thing really well, we wanted to be able to do a lot of things really well, giving people the material they want in the formats they need,” concluded Snodgrass. “The FS1 lets us do all that and more. It has cut the cost of tape entirely from our budget, so it saves both time and money. It’s a great product and I’m very happy with it.”

About FS1
The FS1 is a universal HD and SD audio and video frame synchronizer and converter. With an extremely flexible architecture, the FS1 can simultaneously support both HD and SD video—all in full 10-bit broadcast quality video and 24-bit audio. The FS1 supports virtually any input or output as analog or digital, HD or SD. This product can up-convert or down-convert between SD and HD while providing simultaneous outputs of both formats, and supports both closed captioning and closed captioning conversions between SD and HD formats. FS1 also includes 10-bit HD to HD cross-conversion for 1080 and 720 formats, and AFD support. For audio, the FS1 supports 8-channel AES, balanced analog or embedded audio with audio mapping and full flexibility. The FS1 is also network ready, offering web-based remote control and SNMP alerts.