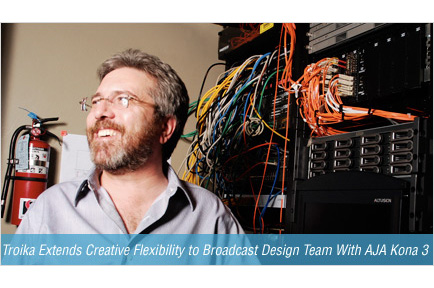 Troika is an Emmy Award-winning design company known for memorable visual brand identities, strategic design and creative production for major clients in media and entertainment, including ABC, FOX, The CW, ESPN SportsCenter, NBC Sunday Night Football, and the NFL Network among many others.

Though best known for its strategic branding and motion graphics design work, Troika maintains full-scale production capabilities servicing clients with everything from pre-viz animatics to live action production, editorial and more. For the last five years, all of the company's in-house editing has been done using Apple's Final Cut Pro. Troika has AJA KONA cards installed on 11 video/animation workstations that are utilized by its designers and artists. These workstations are all connected to a centralized machine room and via fibre to a 15 TB Apple XSERVE server running XSAN. Troika also has an additional six dedicated design workstations connected to the SAN.

"We use KONA 3 and KONA LHe cards on our video/animation workstation so we are able to capture and lay off HD video to our machine room. We give our artists, editors and animators the flexibility to sit down at any one of our computers and get their work done," said Rich Feldman, Director of Technology, Troika.

A majority of Troika's work is in broadcast design, and involves editing of short animated or live action clips—however on larger scale network redesigns for clients such as ABC, the company will shoot live action, design graphics, build animations, composite elements and edit final clips, often for transmission in both HD and SD.

"Our ABC project pipeline incorporated the KONA 3 card at many stages.
We used the KONA 3 to capture and preview the material utilizing its built in DVCPRO HD accelerator. We were able to work quickly with the footage and create rough composites to preview before lengthy renders."

"When we moved to the final finishing stages, the KONA 3 became very useful as we retransferred edited selects from HDCAM SR into the Flame. We were able to capture true 4:4:4 RGB preserving the quality of the green screen for cutting mattes. After all the composites were complete, we used the Mac with Final Cut Pro, to create the final HD Masters. The KONA control panel proved its value as well when we needed to simultaneously preview SD Center-Cut extractions without having to re-render our files." Feldman continued.

"Overall, we choose to work with KONA cards for their flexibility and reliability. We have NTSC monitors connected to all of our workstations, and it's essential that our artists have high quality video monitoring available while they're working on projects. The KONA cards are great for that—and they do my laundry too; they're incredible," joked Feldman.

Troika is a leading Hollywood-based design firm and recently completed Fox's "So Fox" brand campaign to launch the Fall 2008 television season, the ABC refresh and brand campaign to usher in the Fall 2008 season, the NBC Olympic logo for NBC Universal's television broadcast of the summer Olympics and the "Live out Loud" rebrand for the Oxygen Network. For more information visit www.troika.tv.