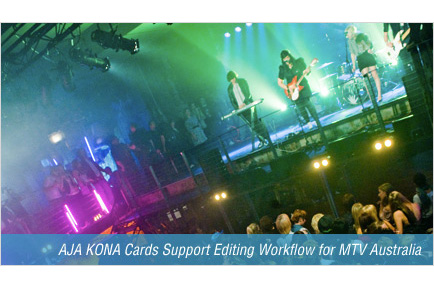 MTV Australia is the cornerstone of music and youth culture programming throughout the country. Owned by MTV Networks, the broadcast channel features imported shows as well as locally produced fare such as MTV's The Lair, a cutting-edge weekly live show showcasing established and unsigned bands from the music scene down under. Additional local programming includes MTV News and The Official Motorola ARIA Chart Show, which provides a current top-20 countdown along with music news, interviews and reviews.

Technical Operations Coordinator Jennifer Crabb is responsible for coordinating the production and post production pipeline for all of MTV Australia's locally produced programs, and relies on AJA's KONA 3 video capture and playback cards as the backbone of the channel's editing environment.

"AJA KONA cards are a major part of our overall infrastructure solution, and we've found them to be much more reliable and stable than competing solutions we've tried in the past," says Crabb. "They allow us to ingest and master material without resorting to external facilities, which saves us both time and money."

AJA KONA capture and playback cards solve a myriad of post-production issues for the busy broadcast facility. Crabb and the rest of the MTV Australia production crew utilize KONA to input and output material using various codecs, as well as to control VTRs and to monitor external devices, among other uses.

"We have a full workflow set up here at MTV Australia.  We shoot, ingest, log and edit, add graphics and motion graphics, conduct viewings and master for delivery," Crabb concluded. "AJA's KONA cards are such an integral part of what we do and we definitely plan on expanding our current setup in the future."

KONA 3 is the ultimate uncompressed capture card for seamless operation with PCI Express (PCIe) Mac Pro systems and Apple Final Cut Pro. Supporting any uncompressed SD or HD format, including Dual Link HD and 2K, KONA 3 captures and plays back uncompressed 10-bit and 8-bit digital video and 24-bit digital audio, providing unparalleled power and workflow efficiency. KONA 3 also includes a variety of 10-bit broadcast-quality features, such as hardware-based
up-, down-, and cross-conversion to and from HD, and adds a live hardware HD/SD keyer for compositing bugs, live clips, and other elements over video.