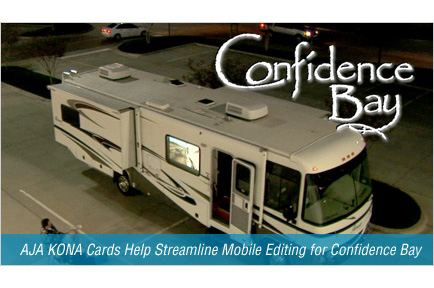 "We edit in a wide variety of environments on a diverse range of content, and no two jobs are ever even remotely alike," says Confidence Bay Chief Technical Officer Sam Crutsinger. "Even with events like the New Orleans Jazz Fest, which we've shot three years in a row, each time requires very different technical setups from the year before."

Confidence Bay is ready to tackle any editing job in any location, coming fully equipped with two Apple Final Cut Pro editing stations that allow producers, directors and editors to see, organize and edit their video in the field. At the heart of the operation are two AJA KONA video capture and playback cards, including the KONA LHe and the KONA 3, AJA's top-of-the-line uncompressed capture card for SD, HD, and Dual Link 4:4:4 HD for Apple Mac Pro systems.

"The nice thing about the KONA card is that it pretty much handles everything—analog, digital, embedded audio—all of it," explains Crutsinger. "We can work with virtually any type of recording deck brought to us, and the KONA card will plug right into it. I have yet to have anyone bring me a deck that I could not hook up and bring into the system using those cards."

Working in the field with a range of video formats, Confidence Bay depends on the versatility of the KONA LHe and the KONA 3 to keep up with customer demands. "The KONA card is primarily about convenience," says Crutsinger. "Someone can feed me a full resolution high definition 1080p signal, and I can capture it at any resolution I need. If a project is editing in SD, I can capture in SD, which is a more hard drive-friendly environment, and avoid handling unnecessarily large files."

"It was a piece of cake to integrate, I just popped the card in and installed the software. The fact that it is so versatile threw me for a loop at first but once I realized that it was just giving me so many extra options, I fell in love with it," Crutsinger continued.

Confidence Bay uses the Final Cut suite to put their projects together and customizes the equipment in their vehicle tailored to each individual shoot. "Depending upon the commercial, festival, feature film, or television show that we are working on, all of the technology has to be modified to match the requirement of the projects. The KONA cards are central to pretty much everything we do—they're always in the mix even when the rest of the technology in the truck gets swapped out."