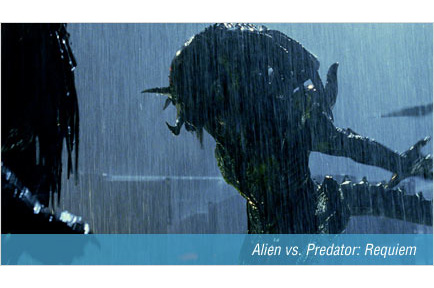 The highly anticipated follow-up to the worldwide 2004 hit Alien vs. Predator is directed by visual effects artists and commercial and music video directors The Brothers Strause. In the effects-heavy film, which was released on December 25, 2007, the iconic monsters from two of the scariest film franchises ever wage their most brutal battle yet in an unsuspecting Colorado town.

The Alien vs. Predator: Requiem editorial team modified their existing workflow to integrate with the pipeline at visual effects studio Hydraulx, setting up an Apple Final Cut Pro editing pipeline for the film that relied heavily on AJA's KONA 3 card. Shot on 35mm 3-perf film, the setup allowed Hydraulx to cut the film at a 1080i resolution, lay down previews to a D5 deck and go out to an HD deck for studio reviews before finishing the film at EFILM with a 2K Digital Intermediate scan and film output. The pipeline employed five KONA 3 cards: a projection system, an editor system, a visual effects editor system, a utility system and an assistant system.

"The AJA KONA 3 cards are rock-solid and completely reliable," says Ryan Chavez, visual effects editor for AVPR. "As much as we push HD formats, the industry is still behind on what it can do with HD, so many times we still need to create a standard definition tape or go from 1080i to 720p. KONA does it all with ease, and the quality is incomparable." Chavez cites a number of reasons for choosing AJA KONA solutions with Apple Final Cut Pro. These include the performance and reliability of the setup, as well as the flexibility gained by making creative changes and outputting without a traditional online.

"We chose KONA 3 because of its flexibility, but it's the features AJA has started to add-such as the downstream keyer-that are making our lives easier," Chavez adds. "The real time keyer saves us hours-we can load images with an alpha channel and it goes straight to tape."

"This project would have been very difficult without the AJA KONA 3 card," comments AVPR editor Dan Zimmerman. "It's capable of so much stuff you need as an editor on a day-to-day basis. The picture quality is amazing, as is the fact that it does multiple layers of real time rendering and on-the-fly burns in matte cover-ups," he continues. "When we first saw the picture quality-full 1080i at DVC PRO HD codec, close to uncompressed-we were amazed. The KONA 3 is remarkable-without it we wouldn't be doing any of this." KONA 3 is the ultimate uncompressed capture card for seamless operation with PCI Express (PCIe) Apple G5 Power Mac or Mac Pro systems and Apple Final Cut Pro. Supporting any uncompressed SD or HD format, including Dual Link and 2K, KONA 3 captures and plays back uncompressed 10-bit and 8-bit digital video and 24-bit digital audio, providing unparalleled power and workflow efficiency.

KONA 3 also includes a variety of 10-bit broadcast-quality features, such as hardware-based up-, down-, and cross-conversion to and from HD, and adds a live hardware HD/SD keyer for compositing bugs, live clips, and other elements over video.