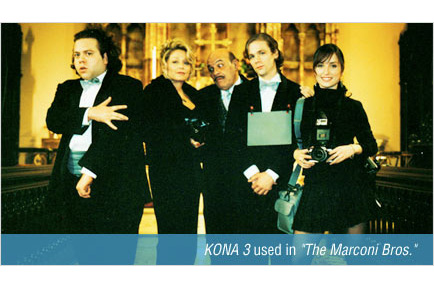 AJA's KONA 3 video capture and playback cards were used with Apple's Final Cut Pro and Color as the finishing platform-of-choice for the upcoming independent feature, "The Marconi Bros.," slated to premiere at the South by Southwest Music, Film and Interactive Conferences and Festivals on Saturday, March 8. KONA 3 is AJA's top-of-the-line uncompressed capture card for SD, HD, Dual Link HD and 2K for PCI Express (PCIe) Apple Mac Pro and G5 systems, and was an integral part of the film's editing pipeline.

Clayton Condit, owner of Minneapolis, MN post facility Splice Here, worked with his post-production team to develop a 4:4:4 workflow for "The Marconi Bros." that relied on AJA's KONA 3 video capture and playback cards and Final Cut Pro to finish the film in time for its premiere at the festival. Shot on Super 16mm film, the project was transferred at 4:4:4 1080p 24fps on a Thompson Spirit to HDCAM SR tapes, undergoing a flat color correction pass to preserve as much of the film's original detail as possible. Employing the KONA 3 card's ability to work in dual link 4:4:4: with Final Cut Pro, Splice Here was able to redigitize the tapes and do a final conform, all in real time, before going on to grading and final color correction.

"AJA's KONA 3 is a quality card that allows us to continue to use the Apple platform for our workflow," Condit explained. "Apple provides a low-cost platform that functions seamlessly across multiple systems, and it's the 4:4:4 capabilities of the KONA 3 that enable us to maintain this flexible infrastructure without sacrificing the quality our customers demand."

KONA 3 is the ultimate uncompressed capture card for seamless operation with PCI Express (PCIe) Apple G5 Power Mac or Mac Pro systems and Apple Final Cut Pro. Supporting any uncompressed SD or HD format, including Dual Link and 2K, KONA 3 captures and plays back uncompressed 10-bit and 8-bit digital video and 24-bit digital audio, providing unparalleled power and workflow efficiency. KONA 3 also includes a variety of 10-bit broadcast-quality features, such as hardware-based up-, down-, and cross-conversion to and from HD, and adds a live hardware HD/SD keyer for compositing bugs, live clips, and other elements over video.