Leading Muay Thai boxing outfit, Swish Club Thai Boxing and Fitness in Hong Kong, recently held their 10th Anniversary charity fight. The gym is renowned throughout the region as one of the top Thai boxing clubs, and has been featured in several film and television productions.

In order to capture the anniversary bouts, pitting Muay Thai champions from China and Thailand against each other, Antony Au, Swish Club General Manager chose to shoot and produce the fights in 4K. Au selected the Canon C500 camera recording to an AJA Ki Pro Quad to capture the fights. AJA’s Ki Pro Quad ﬁle-based recording device is a revolution in 4K production, combining the power of RAW workﬂows with the eﬃciency of Apple ProRes as well as 4K and HD monitoring all in a very portable and aﬀordable package. 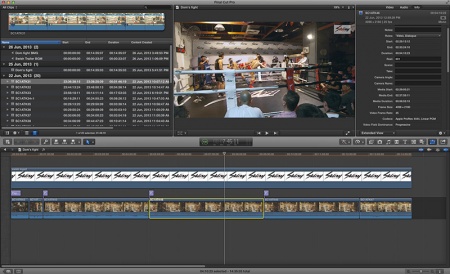 “Why were we shooting in 4K?” Explains Au, “Because we needed to capture the stunning Muay Thai performances with as much quality and resolution as possible. Ki Pro Quad is the only tapeless recorder that supports live debayering of 4K Canon RAW camera data with simultaneous recording to Apple ProRes 444 ﬁles, and that helped us turn around the highest quality production in a very short amount of time.”

Kent Chan, the DIT (Digital Imaging Technician) who dealt with on-set digital ﬁle handling continued, “We had 3 AJA Pak 256GB storage modules and each one recorded 20 minutes of 4K in ProRes 444. We could easily roll them over to continuously record the 2-hour program. Right after the ﬁrst rollover, we started backing up the Pak modules onto CalDigit T3 Thunderbolt storage. We were capturing 4K RAW over Thunderbolt and backing up the Paks simultaneously at 550MB/s. Throughout the process the capture of the 4K RAW data ran seamlessly with control through the AJA CamXchange software.”

To accommodate an overflow of fans who couldn’t fit into the stadium, Au also used 2 of AJA’s FiDO-TR Mini-Converters to extend the connection from a Ki Pro Quad to HD monitors mounted in a co-located overflow viewing room.

Au concluded, “We were very pleased with the performance of AJA’s Ki Pro Quad and Mini-Converters, they provided excellent quality and reliability. The workﬂow is simple and perfect, and made the path from production to post much faster than it otherwise would have been.”