Weekly review show “Just Seen It” currently airs on 246 PBS stations nationwide and can also be viewed via online platforms such as YouTube and HULU. Structured in a format paying homage to revered critics Gene Siskel and Roger Ebert, each 30-minute episode consists of a rotating collection of producers, directors, actors and screenwriters who offer thoughtful, informed analysis on four recent entertainment releases in theaters, on TV and from around the web, along with a critic’s pick. At the conclusion of each discussion, the panel bestows a recommendation of “See It!” “Stream It!” or “Skip It!” on the content up for review. 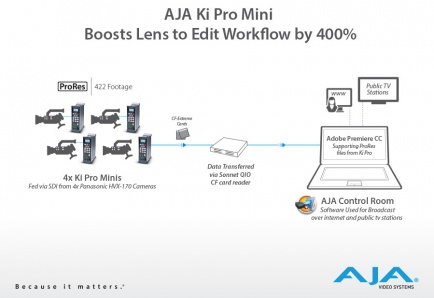 To create each show, the production team leverages four AJA Ki Pro Mini digital recorders. Each Ki Pro Mini is mounted onto a Panasonic HVX-170 camera and records captured footage in the ProRes 422 format. From there, data is downloaded onto a Mac Pro via a Sonnet QIO CF card and brought into Apple® Final Cut Pro® for editing. Prior to using the Ki Pro Minis, P2 cards were used for recording, which required footage to be transcoded to DVCPRO-100 and again to ProRes 422, which was very time consuming for the small production crew.

Since integrating the Ki Pro Minis into the show’s workflow, “Just Seen It” Show Runner David Freedman has seen a dramatic improvement across production and post.

“We can now shoot on all four cameras simultaneously, and footage no longer needs to be transcoded. The Ki Pro Minis have also slashed hours normally required for each editor’s post process, and the time it takes to download a full 32GB compact flash card is four times faster than our previous solution,” he said. “After making the switch, we’ve significantly reduced our production and post production turnaround times, and the show looks better than ever.”