Global investment bank Nomura International relies on its ability to share critical, time-sensitive data with its vast network of traders to stay ahead of trends in worldwide financial markets. Following its acquisition of the London operations of Lehman Brothers in 2008, in 2010, the company consolidated both businesses into a new site and built a new, full-scale, state-of-the-art HD broadcast production facility. The installation enables daily analyst briefings to be distributed to a wide range of internal clients on every available communication platform, from audio/video conferences to IPTV, webcasts and broadcast channels such as BBC, Bloomberg and CNBC. 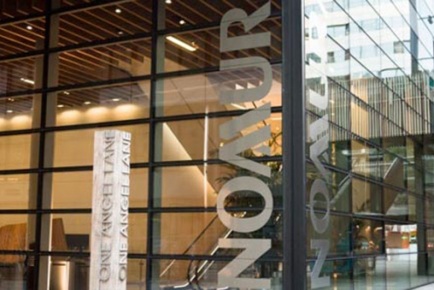 Nomura built the facility as part of a massive 120 million pound renovation of a 500,000 square foot building on the banks of the River Thames in The City of London, and chose ToolsOnAir as its media production and distribution platform. To handle a range of ingest and playout tasks for its all-digital workflow, Nomura relies heavily on AJA KONA cards and Ki Pro tapeless video recording devices.

"There is no way we could have deployed such a complex, high-quality, automated system without AJA products", said Neil Anderson. His company, valued added reseller and broadcast systems integrator NMR, worked closely with AV consultants Mark Johnson Consulting to design and implement the entirely tapeless, all Apple-based, ToolsOnAir HD broadcast production solution at Nomura.

The infrastructure includes ten HD cameras used to conduct interviews from the trading floor and daily analyst interviews from conference rooms. Feeds from those cameras are recorded live, projects are edited on the fly and HD graphics are overlaid in real time for distribution to multiple platforms. In addition to the broadcast production studio, Nomura also has a 200-seat auditorium equipped with four broadcast cameras to record major financial events with ToolsOnAir’s LiveCut EDL recording system.