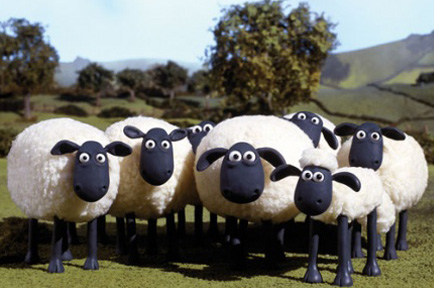 Grass Valley, CA - AJA Video Systems, a leading manufacturer of professional video interface and conversion solutions, announced today that 15 KONA video capture and playback cards are in use at the UK's Aardman Animations, producers of the Academy Award-winning "Wallace and Gromit" films and television series. The KONA family is AJA's line of 10-bit uncompressed capture and playback cards for video and audio input and output on the Mac platform, including KONA 3, AJA's top-of-the-line video card for SD, HD, Dual Link 4:4:4 HD and 2K formats.

Recent Aardman projects using AJA's KONA 3 include the second season of the stop-motion animated children's series, "Shaun the Sheep," a "Wallace and Gromit" spin-off airing in late 2009 on CBBC, the children's arm of the BBC network, and "Timmy," Aardman's first major foray into pre-school programming, which will premiere in 2009 on Playhouse Disney channels worldwide.

"We use the KONA cards for monitoring on all our broadcast projects," commented Paul Reeves, Aardman's technical support engineer, who has been with the company since 2004. "KONA cards do everything we need them to, and they do it well. Once we decided to upgrade to Mac systems in 2006, we put a KONA card directly inside each one, and they've never failed us. We even have an extra KONA 3 we keep on the shelf as a backup, and it's never been used."

Aardman also employs AJA's breakout boxes with all their KONA cards. "The breakout boxes make installation so much easier for us," Reeves explained. "The driver software is also simple to use, much simpler than any other software I've seen for similar products."

In addition to the KONA video capture and playback cards, Aardman also employs AJA mini-converters throughout the facility. "We bought the first ones in 2007, and use them literally everywhere -- in the studios, in the edit bays, and in our new theater. They can do just about anything: HD and SD distribution, SD to HD up-conversions, HD to SD down-conversions, SD audio embedders, SD audio de-embedders, et cetera. We use them all the time and have found them to be perfectly reliable. I've never had to send one back." About the AJA KONA product line The KONA family is AJA's line of 10-bit uncompressed capture and playback cards for video and audio input and output on the Mac platform. KONA cards lead the way with features that satisfy even the most advanced video workflows. From the KONA LSe and its complete suite of analog and digital SD support and the KONA LHe, which bridges the SD and HD worlds, to the KONA LHi with support for HDMI and 3G SDI, going all the way to the industry-leading top-of-the-line KONA 3 with high-end features including SD/HD, hardware up/down/cross-conversion, dual-link and 2K support. A simple, affordable desktop Mac Pro system and a KONA card deliver the quality and function of a full-featured nonlinear editing suite at a fraction of the price.