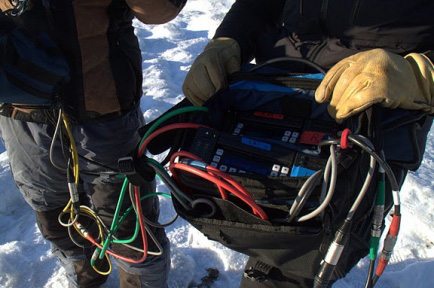 Wildlife filmmaker Adam Ravetch has spent two decades documenting the details of animals’ lives in the far corners of the earth. He is one of just a handful of filmmakers who have shot beneath the Arctic ice cap. He has produced award-wining TV films for National Geographic Television, and PBS, as well as freelanced for the BBC’s Planet Earth series and IMAX, and produced an Arctic feature. In the fall of 2010 he faced a brand new challenge, taking on 3D production of a polar bear documentary for National Geographic Television.

While the 3D production process is becoming more of a known entity in the big-budget feature realm, for TV, and for guerilla filmmakers on a budget, 3D is a wilderness that few have explored. With the goal of producing a high-quality 3D film on a 2D TV show budget, Ravetch built a team and process around gear that included AJA’s Ki Pro digital recorder for field capture and KONA cards for a post workflow that enables direct playback of 3D footage through CineForm’s Neo3D software.

“3D is a challenge in wildlife filmmaking because of the weight of the gear and the reality that it takes more people to handle all of the variables of the rig,” said Ravetch. “The more people on the team, the bigger the budget. Also, the post is more complex than 2D and those services can be expensive. While feature films can handle those costs, in the wildlife industry there’s no real model yet.”

So Ravetch set out to establish a new model. He spent the majority of 2010 working on various 3D productions learning techniques, and then explored emerging lower-cost options for handling 3D production and post. When National Geographic greenlit his project, he began pulling the pieces together for a November 2010 shoot in northern Canada.

“With a typical 3D setup you’d end up with a hundred pound camera package that you’d have to lug around in the snow,” said Mayer. “The Ki Pro setup gave us just the right meshing of format, size and quality. The recorders are small, lightweight and battery powered. Indy just had them rolling in her backpack with a block battery the whole time we were following polar bears around and shooting.”

After each day of shooting the crew would back up the Ki Pro disk media to portable hard drives and then, Ravetch made detailed logs and notes. “It was really run and gun,” he said. “We didn’t have budget, space, or time for a full blown tape backup process. And it turned out that we didn’t need one.”

The two-week shoot was intense. Ravetch said, “Filming in the north is like guerrilla warfare. You have to be ready for anything, change plans on a dime, be able to live on the land and willing to eat almost anything.”

Mayer lauded the Ki Pros’ performance in the extreme conditions. “The Ki Pros were troopers! Both survived sub-zero temperatures for two weeks. They took a beating.”

Since Ravetch and Mayer are editing the film themselves using Apple Final Cut Pro and Adobe Premiere, Ki Pro’s direct capture of Apple ProRes 422 media was an ideal fit for their post workflow. Both also equipped their editing systems with AJA’s KONA capture cards -- Ravetch with a KONA 3G card that enables him to output stereo 3D material through CineForm’s Neo3D software for review on 3D-capable LCD monitors or projectors.

“On the next shoot we’re planning to take KONA 3G and Neo3D into the field to spot-check clips as we go, to make sure the stereo choices work,” Ravetch said.

Right now Ravetch and Mayer are pulling selects and creating a rough cut from the first shoot -- Ravetch from Los Angeles and Mayer from Dallas, and looking forward to the next trip to the North, scheduled for March. They’re hoping to bring AJA’s Ki Pro Mini -- a smaller, lighter version of Ki Pro that captures to Compact Flash cards -- when they go.

“We learned a ton on the first shoot, and we’ll take every bit of that into the next phase, said Ravetch. What we’ve always tried to do in 2D was create an experience of nature for the audience -- to put them right in the middle of it and immerse them. 3D is a perfect storytelling technique for this kind of filmmaking. It’s still the early days for us and we’re figuring things out, but it’s exciting to be a part of something new and emerging, especially if 3D takes off in TV like it has in features.”

Mayer added, “You have to get scrappy to make it work, but 3D is definitely do-able on a budget.”


Since 1993, AJA Video has been a leading manufacturer of high-quality and cost-effective digital video interface, conversion, acquisition and desktop solutions supporting the professional broadcast and post- production markets. With headquarters in Grass Valley, California, AJA maintains an extensive sales channel of dealers and systems integrators around the world. For further information visit www.aja.com.