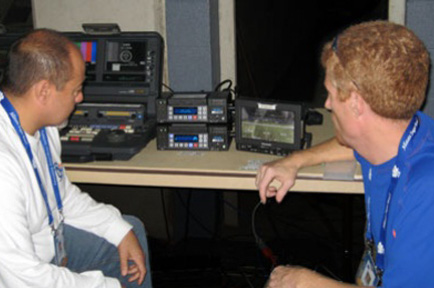 When University of Florida's (UF) Director of Electronic Media for the Athletic Association, Jerry Wetzel was looking for a portable, tapeless HD recording device to travel to the 2010 Sugar Bowl in New Orleans, LA, he turned to UF's new Center for Media Innovation and Research for advice. Professor Tim Sorel suggested looking into the AJA Ki Pro to record video feeds from the New Year's Day game that the Florida Gators played against the Cincinnati Bearcats.

Broadcast feeds of University of Florida games are edited and inserted into various Gatorvision programs such as Florida Football with Urban Meyer. These shows are seen primarily on SUN Sports, one of Fox Sports Regional Networks, and other Florida Gator Network affiliate stations.

"We had been experimenting with the AJA Ki Pro as a back up device for our P2 High-Def EFP workflow. In working with the Ki Pro, we discovered that this is a heck of a standalone VTR," said Sorel.

"We travel across the country to dozens of venues. We never know if we will be getting a HD-SDI or SD-SDI signal from the various production trucks. Additionally, the audio signal we receive is typically analog," explained Wetzel. "The Ki Pro has the ability, through menu settings, to accept SDI video with embedded audio or SDI video and analog audio. What was more impressive was that the Ki Pro's hard drive separates from the main unit and operates as a Firewire 800 drive which we bus-powered with our laptop. Our editor was able to finish cut-downs going home on the plane in Final Cut Pro!"

Wetzel's team typically shoots each Gator home game with 3-4 cameras. For regular season road games, UF usually sends one photographer and works with each production truck broadcasting the game to record ISO, program feeds and replays. "The AJA Ki Pro is a nice fit for recording ISO and program feeds from the trucks," concluded Sorel.

The AJA Ki Pro is a portable, rugged tapeless video recording device that records high-quality Apple ProRes 422 QuickTime files onto computer-friendly media. Because it features SD/HD-SDI, HDMI, and analog inputs, users can interface with virtually any type of camera they may own or rent. Ki Pro's numerous simultaneous outputs enable flexible monitoring, connecting to both professional and consumer monitors. Intuitive to operate, Ki Pro's familiar VTR-like buttons provide immediate controls for basic operation. From a distance, users can control operations with a laptop or iPhone web browser via ethernet or wireless connection.