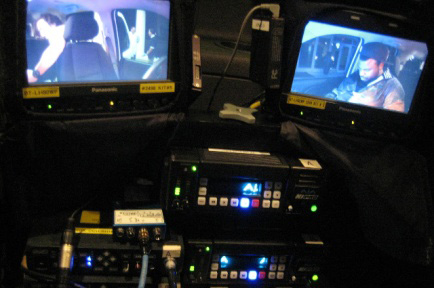 Capturing authentic cinema verite moments for a reality series is difficult. Capturing these moments from the back seat of a Chevy Suburban driving 60+ miles per hour brings the task to a whole new level. That was the challenge faced by Bradley Levin, director of National Geographic Channel’s “Repossesed” and co-executive producer at Stick Figure Productions.

Levin worked closely with the show’s director of photography, Antonio Rossi, to devise a unique workflow for the show that trails a repossession company as they confront individuals from all walks of life to repossess their cars, boats, private planes and other vehicles. Rossi outfitted a rig that could be installed quickly and easily into whatever car was being driven on any of the current season’s 42 shoot days. The rig included two Iconix HD lipstick cameras, each connected to a monitor and two AJA Ki Pros with SSD drives for four hours of uninterrupted capture.

“Last season, which was the first season of the series, we captured onto 33-minute DVC PROHD tapes. Every 33 minutes we had to stop to change tapes, which was very disruptive--particularly with the nature of the material that we shoot,” explained Levin. “Ki Pro enabled four hours of continuous recording which has been ideal for our fast-paced production environment. Once we went into editorial, we could FireWire the SSD drives and bring our material right into Final Cut Pro. It couldn’t get any easier.”

Rossi selected Ki Pros after learning more about the devices at an Abel Cinetech Emerging Technology Workshop, He was impressed by their extended recording times, XLR sound inputs, compact size, meager power consumption, and versatility. “The Ki Pros worked flawlessly the entire season-- through rough weather conditions, in a car during high speed getaways, going up and down ramps, on rough roads, and in the back of a tow truck hauling a heavy load. I was really excited about the optional SSD flash memory drives, which gave me the confidence to use the Ki Pros in the difficult conditions I knew we would encounter. The Ki Pros performed beautifully in every situation and climate during a rigorous shooting schedule.”

Season two of “Repossessed” is in post production and the six one-hour episodes will air on the National Geographic Channel this summer.